During an interview by LBC’s Theo Usherwood to Nigel Farage, members of a crowd gathered around the Brexit Party leader voiced their discontent with Jeremy Corbyn’s failure to deliver a clear message on its Brexit stance. After admitting to the LBC presenter they would now rather vote for Nigel Farage than Jeremy Corbyn’s Party at the upcoming European elections despite having been Labour supporters for a long time, Mr Usherwood pointed out the former Ukip leader was the “antithesis” of Mr Corbyn’s policies.

But one woman in the crowd responded: “That’s beside the point.

“I know what I think, I’ve got my own feelings, my own thoughts.

“I voted to leave and I want to leave. Full stop.”

Another passionate Brexiteer in the crowd explained: “In this room, it’s all about trust and honesty.

“It’s filled with the people that all around the country are attending these Brexit rallies.

“And that’s because when Nigel is asked a question on mainstream TV or any interviews he answers it. 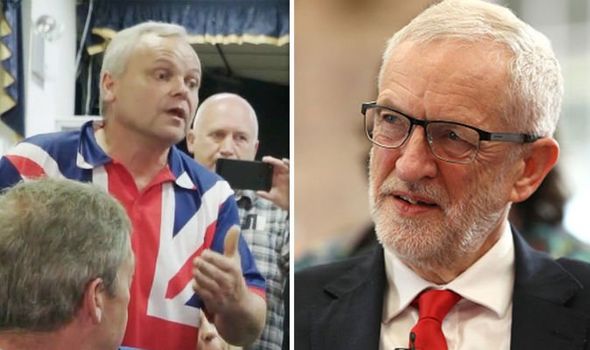 “That’s what matters. All the others that dodge the issue and go around the houses, we’re not deaf to see that.”

Others called for Nigel Farage to run at the next general election and get into Number 10 to lead the country.

The Brexit Party has become the heavy favourite over the last few weeks to be the leading party in the upcoming European elections.

A recent opinion poll where 1,867 people were asked suggested the Conservatives could slump to fifth place in the contest, which is taking place because Brexit has been delayed.

The YouGov study for the Times put the Tories on just 10 percent for the EU election, behind the Brexit Party on 34 percent, Labour on 16 percent, the Liberal Democrats on 15 percent and the Greens on 11 percent.

In a general election, the poll suggested the Tories would be neck and neck with Labour on just 24 percent, with the Brexit Party on 18 percent and Lib Dems on 16 percent.

UK voters in the local elections earlier this month showed general fatigue with the established parties, as the Conservative party forfeited some 1,200 seats.

Speaking to the crowd before the LBC interview, Mr Farage revealed that in the event that the Brexit Party gets 50 seats in the upcoming European elections he may be prepared to do a deal with the Conservative Party to get Brexit over the line.

He added that the only way his party would help push the next Tory leader to power over Jeremy Corbyn was if he could be guaranteed a WTO Brexit.

“I’d do a deal with the Devil to get that, I really would.”