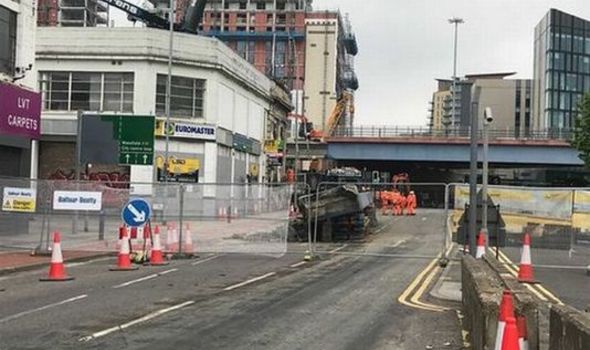 The incident happened in Regent Street, near Leed’s City College’s Quarry Hill campus. The section of the bridge was for the A64 which is currently closed due to long-term construction work to upgrade the flyover.

It is believed workmen tried to move the section of the bridge from a crane.

But the 120-tonne debris fell and landing on a truck.

It is not known whether anyone was hurt.

An eyewitness told LeedsLive: “120-tonne section of the A64 bridge replacement has just collapsed on the truck from the crane.”

Images from the scene have been shared online following the incident and appear show the road has been severely damaged from the incident.

Regent Street at the Inner Ring Road was closed at 8pm on Friday night for the bridge demolition works and was due to reopen at at 5.30am on Monday, May 17.

Yorkshire Ambulance Service confirmed they had not been called to the scene and that there were no casualties.

West Yorkshire Police also confirmed police had not been called to the incident.

The Regent Street Flyover was built in the late 1960s and carries the A64 Inner Ring Road over the A61 Regent Street, and is normally used by 70,000 vehicles per day.

The construction work is expected to take up to two years with completion set for spring 2022.

A government website with details of the project claims: “A specialist mobile crane will be used to negotiate the bridge beams, weighing a total of 220 tonnes, into place.

“The bridge will have an overall total span of approximately 66m, with the largest steel beam measuring 44m in length and weighing 69 tonnes.”