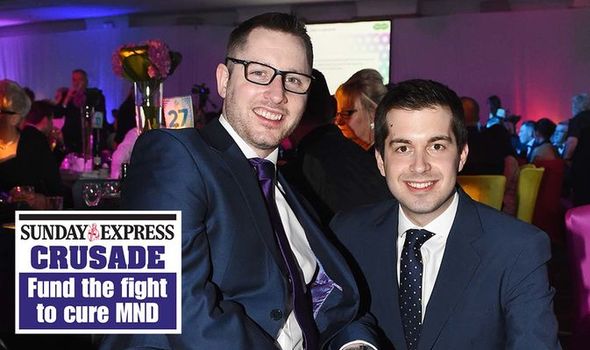 What do you do when you are told you are going to die? My late husband Gordon Aikman was a fit and healthy 29-year-old when doctors broke the news to him. He had motor neurone disease, or MND, a degenerative terminal condition.

A former gymnast for Scotland, Gordon used to backflip across the beach, he was a regular on the dancefloor. He balanced a busy social life with a high-pressure job in politics.

Gordon’s neurologist welled up as he explained that within months his muscles would start to weaken and waste. He would lose the ability to walk and look after himself.

Many with MND stop being able to eat, talk and eventually breathe. Half of patients die within 24 months of diagnosis.

No one knows what causes the condition, let alone how to stop it. There is no cure, no treatment, nothing.

A few months before, Gordon had noticed his hands were getting numb. He struggled tying shoelaces and buttoning shirts. But he never imagined it would turn out like this.

“I don’t believe what he is telling me. I shake my head in disbelief”, Gordon wrote at the time. “My head is a mess. I stand up, walk across to the window, run my hands through my hair and stare out into the middle distance.

“My mind goes blank. I don’t know what to do. I’m 29 years old and I have just been given a death sentence.”

Gordon’s response, however, was not to wallow in sadness or pity, something that would have been perfectly understandable. Instead he got angry.

Angry about how little was known about MND. Angry that the charity MND Scotland was having to fundraise to pay the NHS salaries of the country’s specialist MND nurses. Angry about the limited scientific research into the condition.

He was especially frustrated after watching Eddie Redmayne’s Oscar-winning depiction of Stephen Hawking’s MND diagnosis in ‘The Theory of Everything’.

The physicist’s experience in the 1960s seemed remarkably similar to Gordon’s own. How after five decades had there been so little progress?

Doctors did give Gordon one pill which might slightly slow the disease’s progress through his body.

But even they conceded: if there are any negative side-effects, just stop taking it. It’s not worth it.

Everything exploded that year: 2014. As the Hawking film hit cinemas, the viral ‘Ice-Bucket Challenge’ was zipping around the globe raising hundreds of million of pounds for MND charities as people poured iced water all over themselves. The stars had aligned.

In moments of stress and pain, many fall back on what they know best. For Gordon, that was political campaigning.

On the Ikea kitchen table in our small Edinburgh flat, he launched ‘Gordon’s Fightback’. It was a plan for change, and it was ambitious.

First, he could not understand why the NHS salary of the MND nurse who visited him at home was being paid through charity: “Why should people have to run marathons and hold bake sales so I can die with dignity?,” he said.

After months of persuading and cajoling, Nicola Sturgeon committed to fund all of Scotland’s MND nurses out of the NHS budget.

She also agreed to Gordon’s demand to double the number of nurses. He was thrilled.

This fed into his second, far bigger, aim: to create a research revolution. For people dying from MND, it is the scientists in white lab coats who give hope. Gordon raised more than £500,000 to fund new studies.

He knew any medical discovery would come too late for him, but he wanted to save future generations from having to face the same pain and suffering.

Many MND patients are desperate to take part in trials. Playing a role in potential scientific advance can be exciting and empowering.

By persuading the Scottish Government to fund MND nurses, more of the charity’s cash could go straight into medical research.

By doubling the number of MND nurses, more of their time was freed up to help recruit patients for trials.

Ensuring research can be successful is about far more than answering fundamental questions about this horrendous disease. It is also about building the infrastructure, expertise, skills and systems to run trials in the UK.

Three years ago, it was very rare to have access to a MND drug trial. Now almost everyone in Scotland has access to the brilliant ‘Smart MND’ clinical research programme.

Centres have also opened across the UK in London, Salford, Southampton, Exeter, Ipswich and West Suffolk.

This is a game-changer. But it cannot stop here: momentum is vital.

That is why the ‘United to End MND’ campaign is so important. They want the Government to commit £50million to MND research. A small amount to help stop thousands of people dying as Gordon did.

He was 31 when he died, two and a half years after his diagnosis.

By then, Gordon was using an electric wheelchair, needed help with eating, had a ventilator to assist his breathing, and relied on a wonderful team of carers.

I still wear my wedding ring. I miss his smile every day. And I am enormously proud of everything he achieved.

I just hope our politicians will continue the fight for vital research. It is an opportunity we all must grasp.

In the face of a devastating diagnosis, at the age of just 29, Gordon turned his grief into a drive to fight for the rights of others living with MND and to help fund a cure.

Gordon’s passion and determination to make life better for others with the disease was an inspiration to witness, and work with.

“Through the Gordon’s Fightback campaign and as a trustee of MND Scotland, his impact will have a lasting effect for those living with MND today, and in the future.

Gordon also played a pivotal role in raising awareness of MND and the daily challenges people with the illness can face, by sharing his own personal experiences with the nation.

“He raised more than £500,000 for MND Scotland which has been invested into cutting-edge MND research, and over £100,000 more has been pledged in his name to power the search for a cure.

“We cannot thank Gordon enough for everything he did for everyone affected by MND in Scotland and I’m sure, like Joe, he would be backing our United to End MND campaign all the way to Downing Street.”

Susan Webster is MND Scotland’s head of policy and campaigns