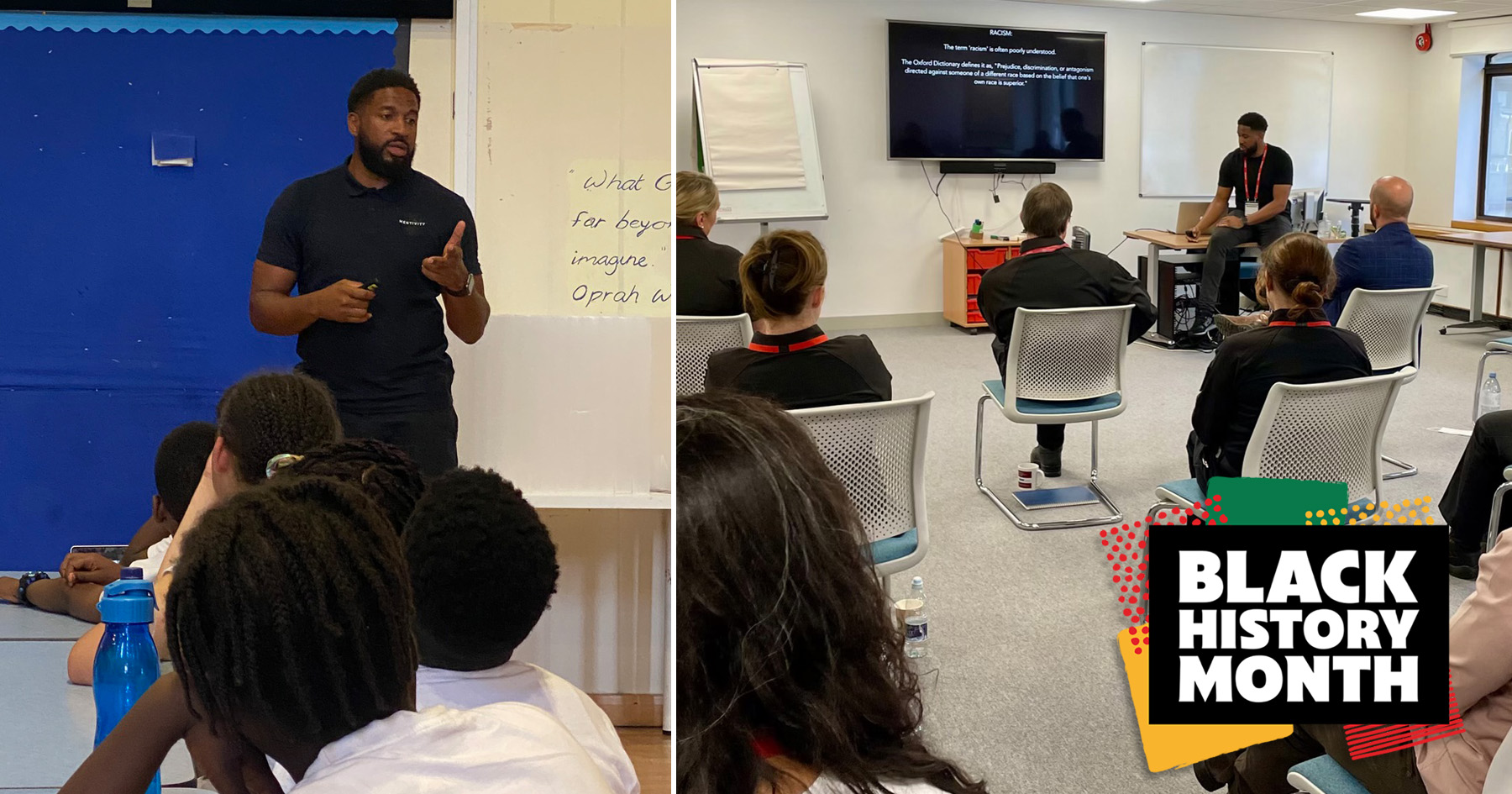 Aylesbury Estate was for years the first port of call for film directors looking for backdrops to gritty crime scenes, but for Sayce Holmes-Lewis, it is home.

The CEO of Mentivity was raised in the sprawling south-east London estate by his ‘hero’ mum.

Portrayed in a poor light for decades, the area and its communities served as his motivation to launch the youth mentoring group, which now boasts ex-mentees like Arsenal’s Reiss Nelson and Manchester United’s Jadon Sancho.

Sayce, who is a few weeks away from turning 40, had been working with the next generations for almost two decades.

But it was two redundancies that pushed him to launch the charity seven years ago.

Inspired by his mum, ex-football coach and headteacher, he set out to ‘change the trajectory’ of young people’s lives through sport, and linking their passions with future careers.

Sayce told Metro.co.uk he recognises himself in many of his mentees, adding that without the guidance of his family, ‘life could have been a lot different’.

‘It is so easy for black men and boys to get into negative areas and become part of a gang. It is very hard to stay away from that,’ he said.

‘I grew up with my mum predominantly. My dad left the house when I was eight.

‘I felt very misguided in terms of the world. Also, being a young black boy in the midst of Stephen Lawrence’s killing was a burden.

‘It was difficult for me to navigate life without having my dad around. He was my role model but he was in and out of my life. We have a good relationship now, but the main inspiration was my mum.

‘She is the centre of the family. She has been a teacher long before she qualified as one. She educated us way before school.’

Sayce described Mentivity as ‘an extension’ of the family unit his mum created.

The charity has worked with more than 25,000 youngsters, who are often at risk of either permanent exclusion from school and gang conscription, or are labelled as low achievers.

Currently, the nine mentors support up to 450 children a week, which involves a mix of one-to-one mentoring, group work, and career guidance.

About 70% of them are boys but Sayce is keen to change this and not let girls fall behind without pivotal support.

Southwark, Lambeth and Croydon are the boroughs the mentors are focusing on the most at the moment as they know the communities there well.

Sayce detailed Mentivity’s work further: ‘It is about meeting young people where they are at.

‘Coming in with your adult, preconceived agenda about what they should and should not do, that is when you lose them.

‘We push them to find what they are passionate about, which can be difficult.

‘Once they have had that feeling then they continue to push on. So, it is not just finding a job for them.’

Mentivity has a curriculum but young people are also consulted at the beginning of the relationship.

As a founder and CEO of the organisation, Sayce is often celebrated as a ‘role model’, which he described as ‘humbling and very powerful’.

Sayce said: ‘Representation is everything, especially in our communities because we never control our own narrative.

‘You know the negative narrative around criminal black men, that is what we have been.

‘It has never been celebrated that there are professionals from our community who are doing great work.’

Ayomide Makanjuola was one of Mentivity’s mentees, alongside a couple of his classmates.

Currently a software engineer at BT, where he has worked for three years, he had no idea what he wanted to do with his life when he was a teenager.

He met Sayce through his brother Tyson, who also works for the charity, and at the time they seemed like ‘cool and approachable guys’, so it was easier to speak to them.

‘Once I felt comfortable speaking to them, I opened up and shared the reasons why I was getting into trouble and my attendance was low,’ Ayomide recalled.

‘I was going through a time in my life when I was confused, and I started getting involved in stuff that I probably should not have. But Mentivity stepped in at that perfect time.

‘They allowed me to get guidance in terms of what I actually want from life itself.

‘Knowing Sayce from the area I grew up in, it was easier to listen to him than the typical careers advisor at school or even teachers.

‘A lot of them did not even understand their own pupils because they are from completely different upbringing and cultures.’

Like a lot of children his age, Ayomide was madly in love with football and wanted to become a professional player.

Mentivity set up training sessions and introduced him to important people from their network.

He said: ‘They also asked me why I wanted to play football, what I got from it and what I was willing to do to achieve this dream.

‘Although I did play a lot at the time, I was not taking it as serious as I should have if it was really my dream.’

Ayomide got involved in training sessions but ultimately, there was another future for him.

Sayce and Tyson also helped him recognise that university would not have been the right move.

The brothers helped him research various tech apprenticeships, which is how the mentee landed the much sought-after role at BT.

Ayomide recalled such guidance never being available from his teachers at school.

Instead, pupils were exposed to controversial initiatives like ‘Say no to gangs’.

They were told youngster join gangs because of the ‘glitz and glamour’ but he found this training misguided.

Ayomide said: ‘Some teachers actually think it’s a myth that children can become involved in gangs.

‘For our community, this is not a fantasy, this is our reality. It is right on our doorsteps.

‘For me and the people I went to school with, these are the everyday things we have to deal with. But the teachers would not understand it.

‘They do not care about what is going on at home. All they do is give detentions and call your parents. These same parents are under ridiculous amounts of stress because of the areas they are in.

‘Teachers do not take the time to understand that pupils are not just numbers, they are people actually affected by their environment. It is all wrong.’