At 3.46am Monday morning, a black Range Rover shot down the A40 Western Avenue at 120mph before crashing into the metal barriers of the Tesla Centre car park. A woman in her 20s, believed to be a female passenger in the Range Rover, died at the scene. The car landed on the tracks of the Piccadilly Line and Park Royal station. Uber driver Nawaf Ali, 40, had just parked his Tesla in the car park when it happened, having decided on a whim to get an hour’s charge for his vehicle before heading home to his children, aged 16 and 17, in Harrow.

He had even intended to park right alongside the car that was struck by the Range Rover.

He told MailOnline: “I could have died last night, and my kids would not have a father.”

The driver of the car that was damaged, a man in his 50s, was hospitalised after being injured. His injuries are believed to not be serious. Luckily for Mr Ali, he had decided on a bay a few metres away.

The male driver of the crashed 4×4 is in a critical condition while another female passenger is being treated for non-life-threatening injuries. All three passengers in the car are in their 20s. 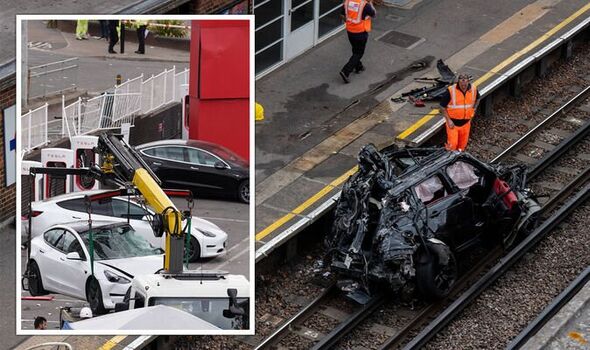 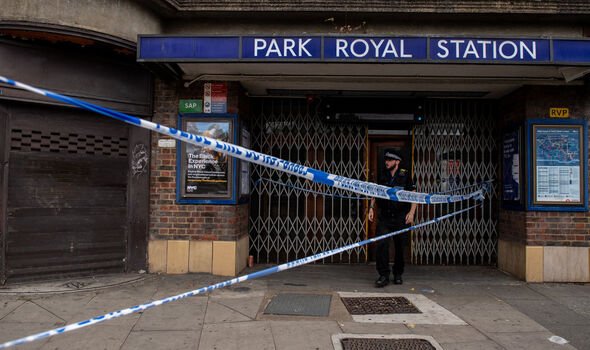 Mr Ali said: “Where I was standing was where the car came over the barrier. If I had been standing a few feet away then I would have been hit. I am still shaking thinking about it. The other car did not hit the Tesla as it was much higher coming through the railings and was in mid-air.

“It was like something out of a horror movie, only much worse. I have never seen anything like it. 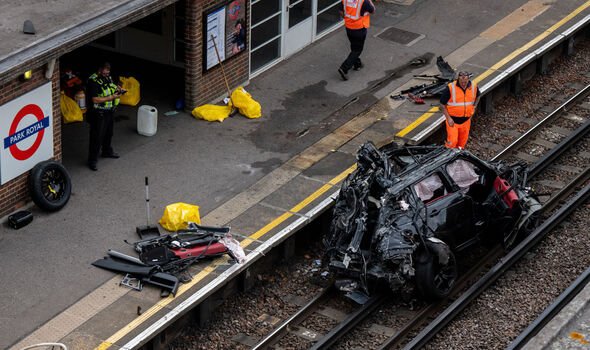 “The ambulance control asked me to check if she was breathing, but she wasn’t. I still can’t get the picture of her out of my mind and am still shaking now.”

He described the awful moment when he first heard the Range Rover coming.

He said: “Suddenly there was a noise like an aircraft crashing. It was so loud. I ducked my head down and this car came flying over the metal barrier. The noise was incredible, but then it was silent. I jumped up and ran over to the other car and the driver was bleeding from his nose.

“He was in shock. I called for an ambulance straight away. He did not seem to know what had happened but did not seem that badly injured. I tried to tilt his seat backwards, but that did not work and did my best to stop the blood. 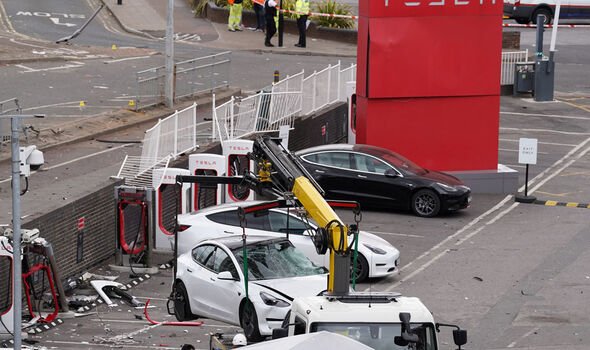 “I looked around but could not see where the other car went. There was just silence. At the time I had no idea where it had ended up.”

After being allowed to head home after talking to police, Mr Ali said: “’I was meant to get some sleep, but I can’t get the image of that girl out of my mind. I had to leave my car at the scene and am waiting for the police to tell me when I can go back to collect it. They also want to take another statement.

“I always used the A40 charging station, but I will never use it again. I just can’t face going back there.”

The next of kin of the woman who died during the crash have been informed of her death. Almost 10 hours after the horror crash a specialist train arrived at Park Royal station to remove the wrecked 4×4 at around 1.30pm.

The wreck was loaded onto an open carriage and taken away, and the line has since been reopened.