The Liverpool suicide attacker is said to have muttered ‘women’s hospital’ to his taxi driver and then sat in stoney silence as he travelled to his would-be target.

Emad Al Swealmeen died when the bomb he had spent months constructing detonated outside a medical facility.

Counter-terror police are investigating whether a nearby service at Liverpool cathedral to mark Remembrance Sunday may have been an intended target.

Unsuspecting taxi driver David Perry picked up the 32-year-old bomber and was lucky to escape with his life when the explosives detonated inches for him.

New CCTV footage has emerged showing the taxi making its way to the spot where it would wind up bursting into flames minutes later.

According to the Mirror, Mr Perry has been grilled by terrorism investigators for 90 minutes about his encounter with the would-be killer.

He was questioned by police in the immediate aftermath of the attack on Sunday and police officers reportedly attended his terraced home in the north of the city yesterday. 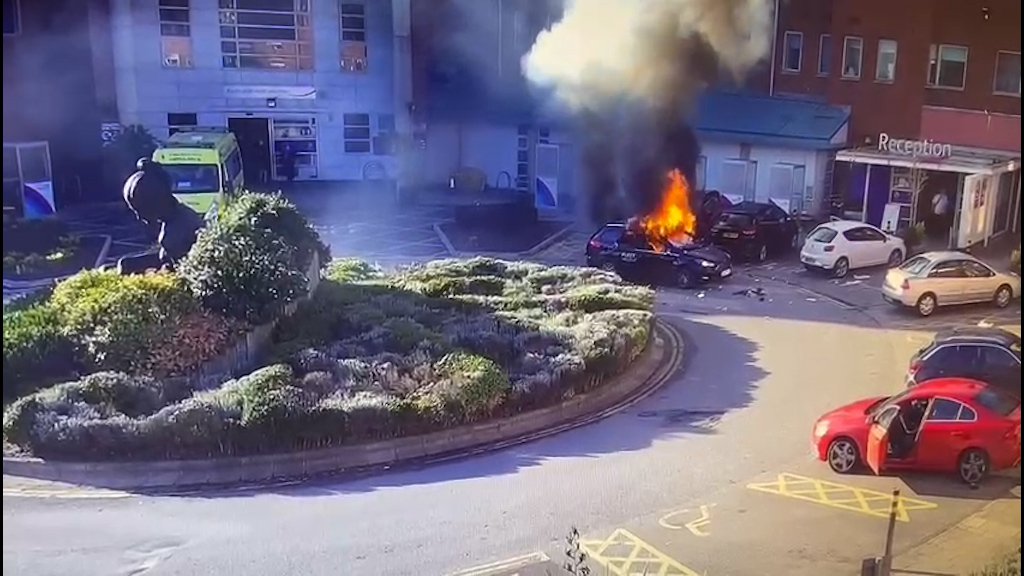 A source close to the driver told the Mirror he spoke only two words, ‘women’s hospital’, and remained mute for the remainder of the seven minute car journey.

They added: ‘He didn’t say another word all the way there. The driver was not aware of anything.’

Mr Perry escaped with superficial injuries but was briefly knocked out by the force of the blast.

The source added: ‘He woke up leaning on the steering wheel. He was trapped and then saw flames coming through the two seats.

‘He couldn’t get his seatbelt off so had to climb out of it.’

Assistant Commissioner Matt Jukes, the head of UK counter-terrorism policing, has told the British public to expect to see enhanced security at events after the terror threat was raised to severe.

He told the Press Association: ‘All across the country you will have seen plans for major events reviewed, you will see an increased armed policing presence in some key locations.

‘In places like London where we have dedicated counter-terror patrols they will be very focused.

‘You will see some more visible policing, but of course also we will be very active in other places. Online, in our communities talking to people about their concerns.’

Investigators believe Swealmeen, an asylum seeker originally from Iraq, has been buying components for the bomb since at least April and had previously accessed mental health support.

UK counter-terrorism police, who along with the security services are working on around 800 live investigations, want the public to remain vigilant about the risk of terrorism in crowded places in the run-up to Christmas.

Concerns have been raised that some asylum seekers in the city may have pretended to convert to Christianity in order to bolster their visa applications.

Liverpool Cathedral, where al Swealmeen was baptised in 2015 and confirmed in 2017, said that asylum seekers who convert would be expected to be ‘closely connected’ with the congregation for at least two years before staff would support a visa application.

A spokesperson said: ‘Liverpool Cathedral has developed robust processes for discerning whether someone might be expressing a genuine commitment to faith.

‘These include requirements for regular attendance alongside taking part in a recognised Christian basics course. We would expect someone to be closely connected with the community for at least two years before we would consider supporting an application.’

There are growing fears a newly discovered COVID-19 variant, said to be potentially more dangerous than the one causing waves of infection around the world,…