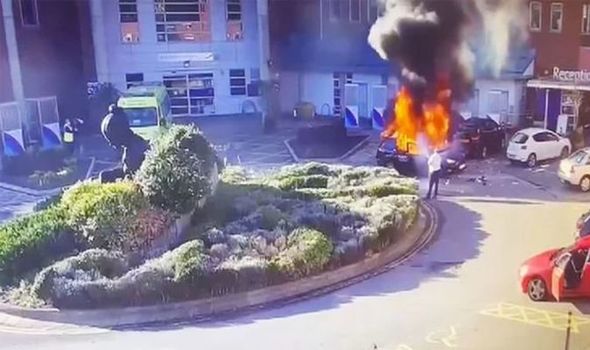 Emad Al Swealmeen, 32, died when his bomb blew up outside Liverpool Women’s Hospital on Remembrance Sunday. Experts have now revealed it may have exploded prematurely when his taxi suddenly jolted to a stop.

The blast left taxi driver David Perry, 43, lucky to escape with just minor wounds before the vehicle was engulfed in flames.

Mr Perry may have put his brakes on suddenly at the hospital drop-off point, causing the explosion, it was said.

Russ Jackson, head of Counter Terrorism Policing North West, said the fact it detonated inside the taxi meant only the bomber was killed.

Experts believe had the bomb functioned as intended, metal fragments would have been flung in all directions, shredding the car and cutting down passers-by.

Mr Perry is thought to have escaped serious injury because the blast was largely confined to the back seat before the vehicle erupted in flames.

Mr Jackson added that they had found no links to the 2017 Manchester Arena attack.

A post-mortem examination found Al Swealmeen died from injuries caused by the explosion and subsequent fire.

Mr Jackson said it was still unknown why the bomb exploded when it did, adding: “We are not discounting it being completely unintentional.”

He added: “It is a possibility that the movement of the vehicle, or its stopping, caused the ignition. Had it detonated in different circumstances we believe it would have caused significant injury or death.”

Mr Jackson said the bomb had been made “using homemade explosive and had ball bearings attached to it which would have acted as shrapnel”.

He said detectives were trying to understand “the way the purchases for the ingredients to make the device were made”.

The work is complicated “because purchases have spanned many months and Al Swealmeen has used many aliases”, he added. Al Swealmeen, had been renting a flat in Rutland Avenue, near Liverpool’s Sefton Park, since April and had been making “relevant purchases” for his bomb since then.

Yesterday, a bomb disposal unit was seen by the property. Officers have recovered traces of chemicals, indicating he experimented with various explosives. Mr Jackson added that his team have spoken to the bomber’s brother to gain “an insight into his early years and understanding of Al Swealmeen’s life and recent state of mind”.

It is claimed the bomber was born in Iraq, and that he had a history of mental illness. His family settled in the United Arab Emirates in 1996.

Al Swealmeen left for Syria 12 years ago, then headed to Turkey before arriving in the UK seeking asylum in 2014, claiming to be Syrian and escaping persecution.

He had an asylum application rejected the following year, but had made a fresh appeal last January. His submissions were under review at the time of his death.