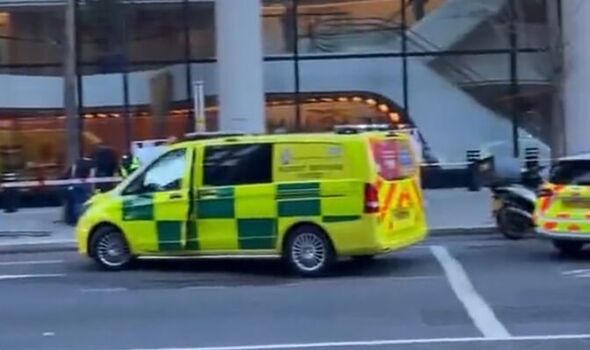 Police have descended on a “major incident” near Liverpool Street Station amid reports of four people being stabbed.

London Ambulance Service is also present at the incident, where it is believed multiple people are injured.

Emergency services are yet to confirm the exact nature of the call but witnesses told My London someone was trying to steal a bike when a fight broke out.

This reportedly led to people getting injured.

City of London Police tweeted: “We are aware of an incident this morning on #Bishopsgate. Our officers are at the scene and @Ldn_Ambulance are in attendance. A cordon is currently in place.”

Express.co.uk has contacted the force for more information.

Another witness said on Twitter the incident happened “less than 200 metres from the City of London police station” and “went on for two minutes”.

A cordon remains in place on Bishopsgate, which runs through City of London. It was one of the eastern gates in London’s former defensive wall.

Please check back regularly for updates on this developing story.

Get email updates onthe day’s biggest stories straight to your inbox by signing up for our newsletters.

Get all the big headlines, pictures, analysis, opinion and video on the stories that matter to you by following Daily Express every time you see our name.

Follow Daily Express on Google News, on Apple News and on Flipboard.

Keep up-to-date with your must-see news, features, videos and pictures throughout the day by following us on Facebook.