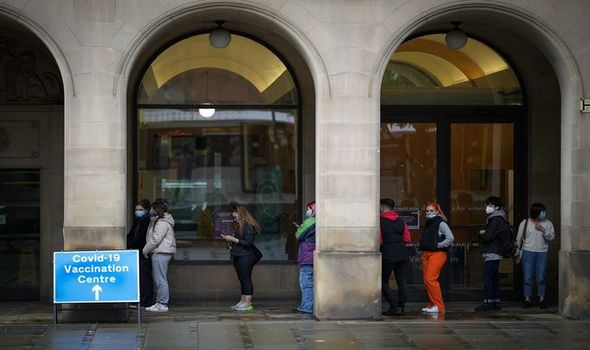 Leaked Treasury documents laid out a bleak assessment of the impact tighter winter rules would have on the fragile recovery. Separate analysis warned that imposing the use of vaccine passports in large venues could backfire by encouraging people to head to poorly ventilated pubs instead. The Prime Minister has resisted calls from some scientific advisers to trigger Plan B after a rise in cases.

Downing Street stressed again yesterday that the emergency measures will only be introduced if pressure on the NHS becomes unsustainable, which “is not the case currently”. Plan B measures include legally mandating face coverings, reintroducing working from home and the use of Covid status certificates in some settings.

Papers drawn up by the Treasury and the Cabinet Office’s coronavirus task force warn that imposing restrictions until the end of March would cost the economy between £11billion and £18billion.

The documents, obtained by the Politico website, suggest most of the damage would be done to businesses from millions of people returning to working from home.

While the measure has a big economic impact, it is only predicted to have a moderately positive effect on cutting transmission of the virus.

Mandatory vaccine certification at large venues, such as nightclubs and music venues, could reduce transmission at events by 40-45 per cent, which works out at between one and five per cent in the wider community.

A No 10 spokesman said: “The presumptions put forward here are untrue and do not reflect Government policy. The data does not currently show that Plan B is necessary – and there is no planned five-month timeline.”

An impact assessment by the Department of Digital, Culture, Media and Sport warned about the possible unintended consequences of mandatory vaccine passports. It suggested the measure could encourage people to instead go to poorly ventilated pubs and therefore be “counter-intuitive and potentially counter-productive”.

The analysis said turnover of venues hit by the move could drop by between £345million and £2billion.

A DCMS spokesman said: “There is good evidence to suggest certification would have a beneficial impact on infection rates and it would also avoid the need for capacity caps or closures.

“There is currently no evidence to suggest that businesses have been impacted by lower attendance when certification is used, with various venues already using this.”

Greg Parmley, the chief executive of the LIVE music industry body, said the leak shows the move to mandatory use of passports “would be a mistake. These passports would cost the live music industry billions of pounds while aspects of the rollout would be impractical and potentially dangerous.”

Latest daily figures showed a further 263 people had died within 28 days of testing positive for Covid-19 – the highest figure since March 3.

Another 40,954 cases were recorded in the UK yesterday.

A total of 6,442,000 people had a booster jab or third dose as of Monday. The figure does not differentiate between the number of people given a third jab due to a weakened immune system, and those who have had a booster jab.