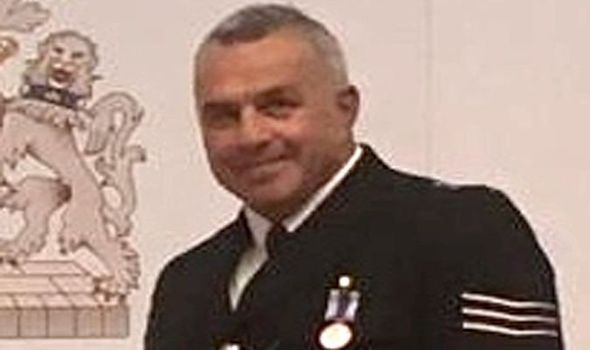 The 54-year-old sergeant was shot dead at a custody centre in Croydon, south London a year ago.

On the eve of today’s National Police Memorial Day, the Met Police held a minute’s silence at 11am to mark the first anniversary of his death.

The loving father, who emigrated to Britain from New Zealand in 1989, had been with the force for almost 30 years. He left behind partner Su Bushby.

Louis De Zoysa, 24, of Banstead, Surrey, has been charged with his murder. He is accused of discharging four bullets in a holding cell last year.

Tributes to Sgt Ratana were led by Met Commissioner Dame Cressida Dick, who said a full memorial service in his honour will be held in November.

‘Sgt legacy “Matt has very much been in our thoughts over the last year, as we grieve for him, but also as we celebrate his life,” said Dame Cressida.

“His legacy lives on with his family and friends from the Met, rugby and beyond.

“When Matt was killed, Covid meant the Met was not able to mark his death with a force funeral in the way that we would have wished.

“I said at the time that when restrictions were no longer in place, we would hold a full memorial service to allow us to come together in Matt’s memory.”

Matt Marriott, vice chairman of East Grinstead Rugby Club in West Sussex where Sgt Ratana coached, said: “It was a year ago the president of the club and I gathered in my kitchen amongst floods of tears as we just heard the news. It’s been a tough year as a club.”

Today, Home Secretary Priti Patel will join relatives and colleagues to remember the 5,000 police officers who have died in the line of duty in the past 180 years.

For this year’s National Police Memorial Day, Ms Patel will give a reading to a small congregation including senior police and family members at Lincoln Cathedral, in a service led by the National Police Chaplain, Reverend Canon David Wilbraham.

The 18th annual event, set up by now-retired Kent Inspector Joe Holness following the brutal death of his colleague PC Jon Odell in 2000, will also honour the estimated 30 officers and staff who died with Covid.

Speaking in a pre-recorded message, Ms Patel will tell officers: “Thank you for continuing to do your exceptionally challenging job in these exceptionally difficult times.”

Widow Annie Coker is one of three relatives leading the prayers. Her late husband, Detective Constable John Coker, a father of three who died aged 53 from Covid in April last year, was in the British Transport Police based in Euston.

Speaking before the event, Dame Cressida said nine of those who died from Covid were from her force.

She added: “When the pandemic ends I am sure we will see it as one of the defining moments in the history of policing.”