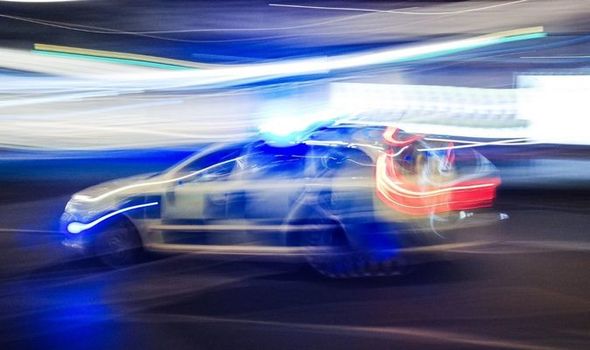 The policeman has been rushed to hospital after suffering injuries to his lower body. He was standing next to a stationary police vehicle when he was knocked down in Dartmouth Park Hill in Camden. The incident happened shortly before 3pm. The area has been cordoned off while police conduct an investigation.

Multiple road closures are in place.

The police vehicle was also damaged in the smash.

A spokesman for the Metropolitan Police said in a statement: “The driver of the suspect vehicle did not stop at the scene.

“Enquiries are underway to trace both driver and vehicle.

“The injured officer was taken to hospital by LAS. We await an update on the officer’s condition.

“A crime scene remains in place.”

A spokeswoman for London Ambulance Service said the officer had been taken to a major trauma unit for treatment.

She said: “We sent an ambulance crew and an incident response officer to the scene.

“We treated a man and took him to major trauma centre as a priority.”

Anyone who witnessed the hit and run or who may has dash-cam footage of the incident is asked to call police on 101 or tweet @MetCC quoting 4030/15APR.

To give information anonymously, people are urged to call Crimestoppers on 0800 555 111 or click here.