Supporters of the Million Mask March, an anti-capitalist group that has been backed by people anti-Covid masks, joined protestors angered by a second national lockdown in Trafalgar Square yesterday. The 190 people were arrested for breaching the coronavirus legislation introduced in September which enables police officers to hand out large fines for breaches of the lockdown. One of those arrested is facing the possibility of a £10,000 fine, while the other 189 face a fixed penalty notice.

One arrested protester said she participated in the demonstration “because it’s clear the Government is lying to us and it’s not fair”.

The woman, in her 30s, who does not want to be named, said she had just managed to get her business back-on-track after the first lockdown when the second was announced.

She said: “My business has closed again and it was closed for six months. I managed to get nine weeks [of trading].

“Last Thursday was the first day that I felt it was getting back to how it used to be, and then Saturday we got the lockdown news. 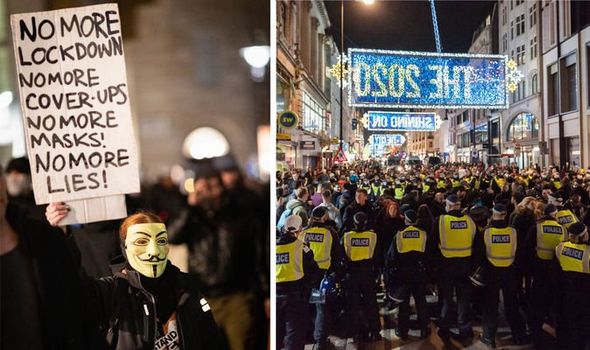 Matt Twist, deputy assistant commissioner of the Metropolitan Police, said most arrests were made because people were not following orders.

He said: “Officers explained very clearly the regulations and unfortunately a number of people took deliberate steps to ignore the direction.

“Because of this, firm action was taken and a large number of arrests were made. We will not tolerate these dangerous breaches of the regulations.”

Mr Twist warned the public to follow the rules, confirming officers will be “out and about” over the coming weeks to ensure a clampdown on those breaching them.

He added: “Those who came out to protest last night put their health at risk and frustratingly, they put the health of London and our officers at risk, this is clearly unacceptable.” 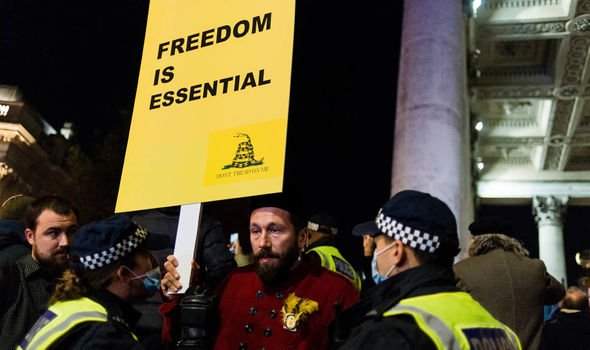 Police initially struggled to contain the event but encouraged the large gathering to break-up at around 7pm.

Smaller groups headed towards Oxford Street, Soho and the Strand. They could be heard chanting “freedom” and “no more lockdown”.

Many carried placards calling for ‘the truth’, fearing the Government has not been transparent about coronavirus and the British economy.

City of London and Metropolitan Police forces emplored protestors to go home: “You are breaking the law.” 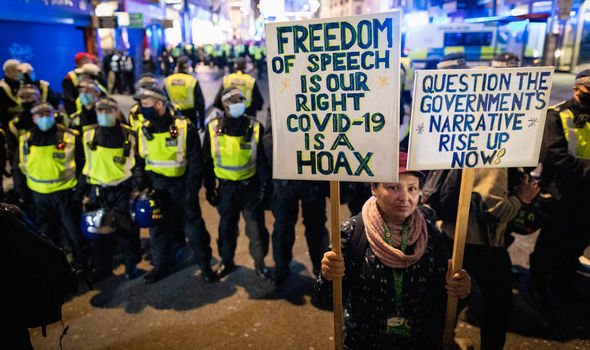 The Metropolitan Police has since condemned the protest. Writing in a Tweet, they reminded everyone to be vigilant.

They wrote: “We remain in a national health crisis and new heightened restrictions have been brought in to limit the spread of Coronavirus.

“This action is being taken to keep everyone safe. A policing plan will remain in place throughout the night.”

The new rules brought in on Thursday mean people must stay at home where possible but can leave for work, education, exercise, medical reasons, essential shopping, or to support others.

This month has seen similar protests unfold in other major European cities including Berlin, Madrid, Dublin, Prague, Paris and Milan following the news of stricter measures in the lead up to Christmas.