Some 50,000 runners will take part in Sunday’s London Marathon with organisers promising the long-awaited event will “shine a light” around the world.

A total of 889 days have passed since the race was last run in April 2019, before the pandemic struck.

Last year’s event had to be cancelled, with just the elite athletes permitted to run laps of a circuit in St James Park under strict COVID restrictions. 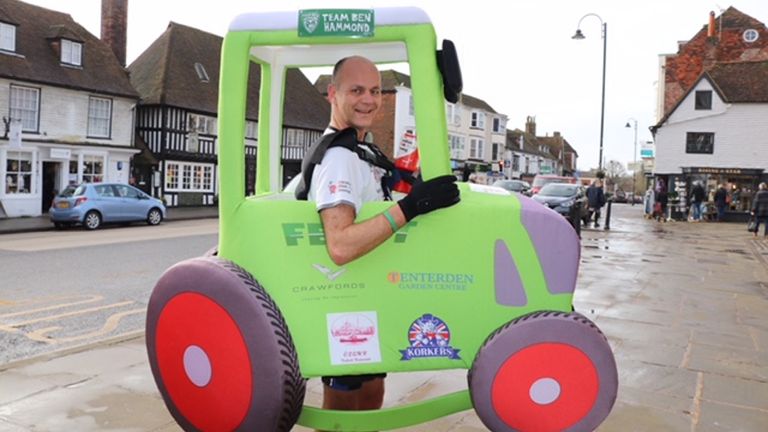 A further 50,000 people around the world are expected to take part in a “virtual” London Marathon this weekend, making it potentially a record-breaking event in terms of runners taking part.

“The marathon will be broadcast in 198 countries around the world and it shows a message of hope and togetherness,” said London Marathon event director Hugh Brasher.

“It will show that there’s light at the end of this desperately dark tunnel we’ve been in for the last 18 months. This is about London’s heart and soul coming back.” Runners taking part have had to provide a negative lateral flow test for COVID-19 before dropping their kit bags off at the registration centre in east London and picking up their race bibs.

Traditionally competitors leave their bags at the start line on race day and collect them at the finish, but the organisers have made changes to reduce the risk of infections.

Medals that were put around runners’ necks at the finish line will now be inserted into their kitbags. “The London Marathon coming back is definitely a step on the pathway back to normal,” said former winner and former marathon world record holder Paula Radcliffe.

She added: “The runners have had to adapt, they’re going to be starting in waves of about a thousand at a time, with a buffer zone between each wave. Events like this starting up again are going to make a huge difference. It’s such a unique, amazing day, it encompasses the spirit of London and it’s very, very special.”

Among those taking part will be 46-year-old Scott Green who has run 250 miles this week from Torquay to London to raise funds for the mental health charity MIND. “He was the life and soul of the party and had just landed a job as a quantity surveyor. Hayden was football mad and he loved Man Utd. I’ll be thinking of him all the way round.

“It has been one of the worst times of anybody’s life, just horrendous. During the pandemic, mental health has been impacted massively and I want my running to raise awareness of that.”

The race has helped raise more than £1bn for charities since it was first held in 1981.

The London Marathon is now in its fifth decade and if this year’s anticipation levels are anything to go by, this could be one of the greatest sporting comebacks ever.