James Bascoe-Smith was riding through a residential area in Brixton when he was set upon by a group of people in a “horrific and unprovoked” attack on February 23. The Metropolitan Police were called to Henry Road, at 6.15pm and found the 17-year-old suffering from stab injuries. Paramedics from the London Ambulance Service (LAS) attended and he was taken to hospital, where he is still undergoing treatment.

Five weapons, including two Rambo-style knives, two “Zombie” knives and a kitchen knife, were recovered from the scene.

The teenager’s aunt, Rachel Duncan, said: “The perpetrators do not realise the ripple effect of their actions.

“They have not just violently injured James, they have ripped apart our lives.

“I urge anyone who knows anything about the attack to come forward.”

The Met said two vehicles, a black VW Passat and black Range Rover Evoque, travelled in convoy from the Kennington area to Henry Road prior to the attack.

An investigation is ongoing but there have been no arrests. 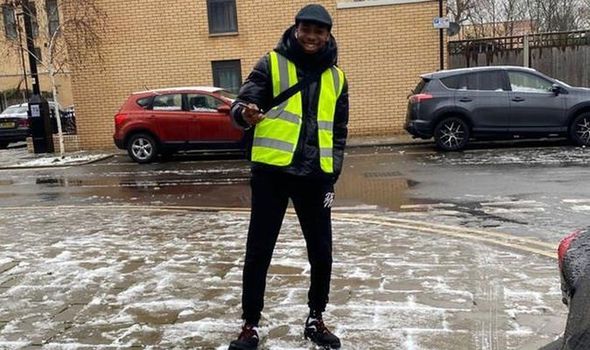 Renewing the appeal for witnesses, detective Sergeant Charlotte Carter said: “We now know that two vehicles, a black VW Passat and a black Range Rover Evoque, travelled in convoy from the Kennington Oval area to Henry Road prior to the attack.

“The same vehicles then left in convoy, with the Passat abandoned in nearby Foxley Road minutes later.

“The Range Rover would have been noticeable because the only rear lights that worked on it were the brake lights.

“It returned to the Kennington Oval area where police located it, abandoned, at 3am the next morning.

“I am appealing for any witnesses who may have any information about the attack on Henry Road, or the movements of this distinctive looking Range Rover, to come forward.”