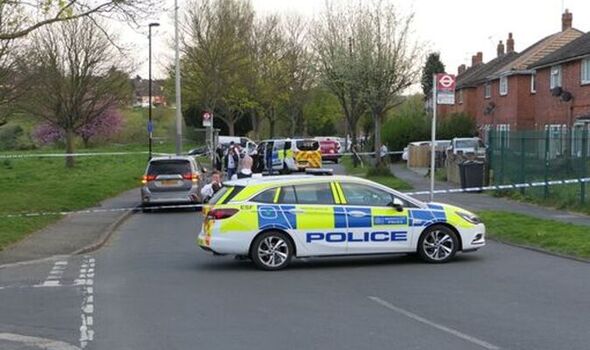 Across a number of incidents, six people were treated in hospital for stab wounds in the capital ahead of the final day of the long Easter weekend. On Friday, three teenagers were stabbed in broad daylight in south London after a fight broke out in Croydon.

Police were called to the scene in New Addington just after 4.35pm on Friday.

Three people, aged 15, 16, and 18, were whisked away to hospital by emergency services.

One victim, who was believed to have sustained serious injuries, was later confirmed as having suffered “non life-threatening” wounds.

A Met Police spokesperson said: “A Section 60 has been authorised for New Addington and wards in the north of Croydon, including Waddon, Fairfield, Parkhill, Whitgift and Shirley South.

“This will remain operational until 0700hrs on 16 April. Please support police officers as they work through the night to keep people in Croydon safe.”

The Metropolitan Police then said two people have been arrested in connection with the stabbings on Goldcrest Way.

The following day, police were alerted after a 27-year-old man was stabbed and rushed to a major trauma centre in the same area of New Addington.

The site of the second stabbing incident is believed to be less than half a mile from the scene of the triple stabbing.

On Saturday, the London Ambulance Service called the police after reports of a stabbing at Headley Drive.

A London Ambulance Service spokesperson said: “We were called at 3.18pm today (16 April) to reports of an incident in Headley Drive, New Addington.

“We sent two ambulance crews, an incident response officer and a fast response unit to the scene. We also dispatched London’s Air Ambulance.

“We treated a person at the scene and took them to a major trauma centre.”

It is not thought the victim is in a life-threatening condition, and no arrests have been made.

In the early hours of Sunday morning, police were called to the east London district of Shoreditch as two men in their 20s were taken to hospital with head and knife injuries.

“Two males taken to hospital with head and knife injuries. One not life-threatening; we await an assessment of the other male.

“Crime scene in place. No arrest as yet.”

They then appealed for witnesses to contact the police on 101 using the reference ‘1298/17Apr’ or visit @CrimestoppersUK.

Just ahead of the Easter weekend, a 16-year-old boy was stabbed to death in a park in Lewisham, south London.

On Wednesday, police were called just after 4pm to the scene of a fight in progress on Angus Street.

The boy was pronounced dead at the scene, and a Section 60 stop-and-search order was put in place across Lewisham.