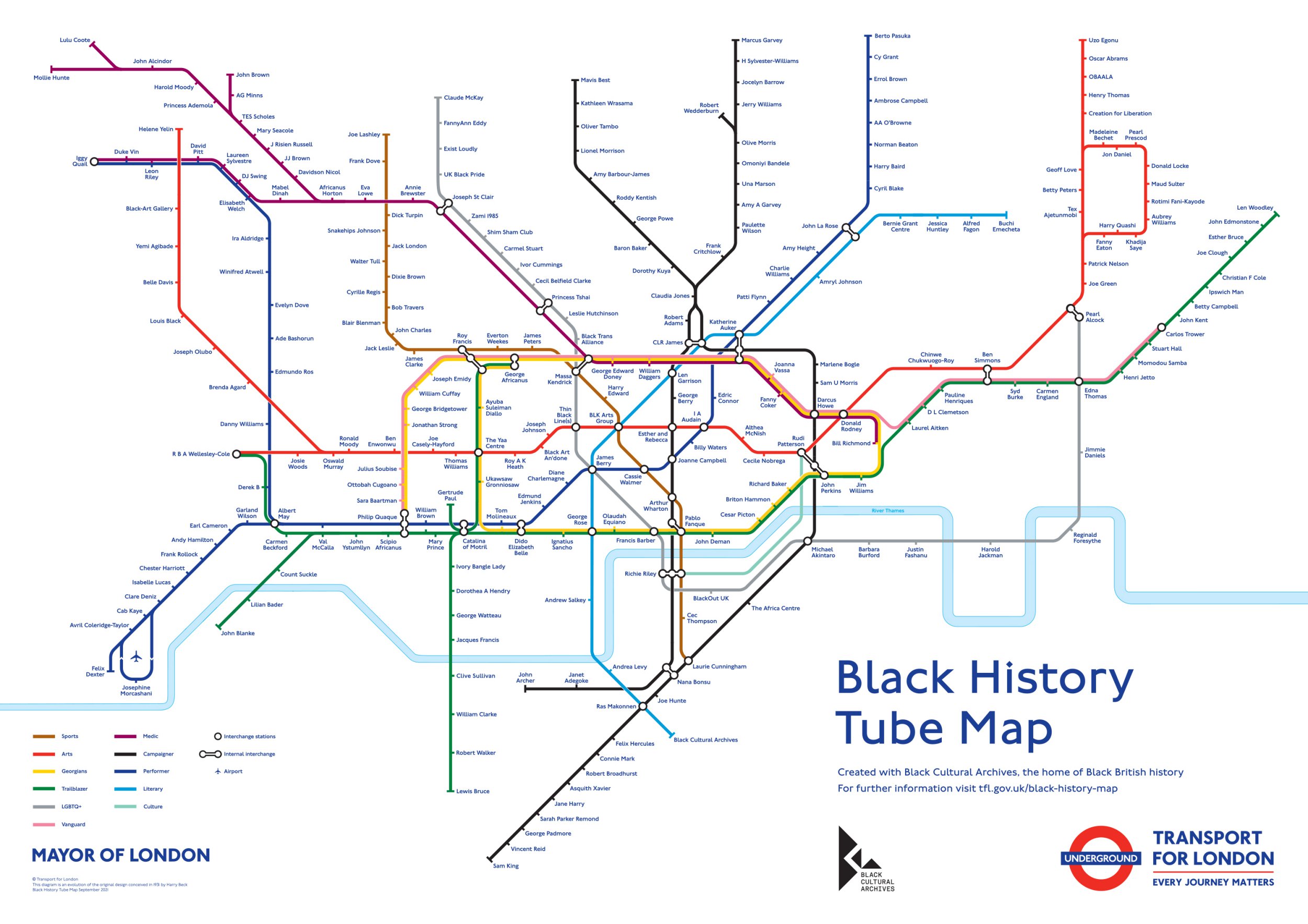 London’s Tube map has been powerfully recreated to honour hundreds of people who helped shape black history in Britain.

The 272 station names have been replaced by notable black figures from pre-Tudor times to the present day.

They include the first black woman to serve in the Royal Navy, who disguised herself as a man called William Brown.

Other people featured are Victorian circus owner Pablo Fanque, who inspired the Beatles song Being for the Benefit of Mr Kite!, and composer and poet Cecile Nobrega, who led a 15-year campaign to establish England’s first permanent public monument to black women in Stockwell.

The map was produced by Transport for London in partnership with Black Cultural Archives, a cultural centre in Brixton, south London.

The names of Tube lines have also been renamed to link them by common themes.

The Bakerloo line represents sports stars, like Olympic runner Harry Edward, while the Central line relates to those in the Arts, the Circle line remembers Georgians and the District line honours trailblazers.

The map also pays tribute to community figures such as Claudia Jones, a political activist who co-founded Notting Hill Carnival, and Paulette Wilson, who fought her own deportation to Jamaica and brought media attention to the human rights violations of the Windrush scandal.

Some stations were renamed after historic inhabitants. Tottenham Hale has been renamed Bernie Grant Centre, after the building in honour of the former Labour MP, while Battersea Power Station is John Archer, the first black mayor in London.

Meanwhile, West Brompton station has been renamed Ivory Bangle Lady, the name given to the remains of a high-status North African woman from fourth-century Roman York.

Her remains were found with jet and elephant ivory bracelets, helping archaeologists discover that wealthy people from across the Roman empire were living in the UK at the time.

London mayor Sadiq Khan said: ‘Black history is London’s history and this reimagination of the iconic Tube map celebrates the enormous contribution black people have made, and continue to make, to the success of our city.

‘This starts with education and that’s why this new black history Tube map is so important.

‘It gives us all the chance to acknowledge, celebrate and learn about some of the incredible black trailblazers, artists, physicians, journalists and civil rights campaigners who have made such significant contributions to life in the capital, as well as our country as a whole.’

The work honours Black History Month, which happens every October and aims to celebrate the enormous contribution Black Britons have made to UK society

‘We’re delighted, as part of our 40th anniversary celebrations, to use this opportunity to share new and old stories about black history with Londoners and visitors to London.

‘We hope that the map will be an invitation to find out more and to explore.’

October marks Black History Month, which reflects on the achievements, cultures and contributions of black people in the UK and across the globe, as well as educating others about the diverse history of those from African and Caribbean descent.