The Electoral Reform Society hit out after peers announced they would not be following the lead of the House of Commons’s which is screening its online proceedings live. The campaign group has also criticised peers for pushing for their £323 per day allowance while working from home. The House of Lords, which returns today after Easter recess, will have a mix of online and in-person proceedings but members are being encouraged to stay away.

Electoral Reform Society chief executive Darren Hughes said: “It is jarring to see Lords lobbying to receive their full £323-a-day expenses without voters being able to see what they’re doing with it.

“This will strike most people as tone-deaf when millions of workers have had to make sacrifices during this crisis.

“Voters across the world expect to see the legislators they are paying: it’s a core part of democratic transparency. This seems to be another sign of the Lords failing to meet the democratic standards voters expect. 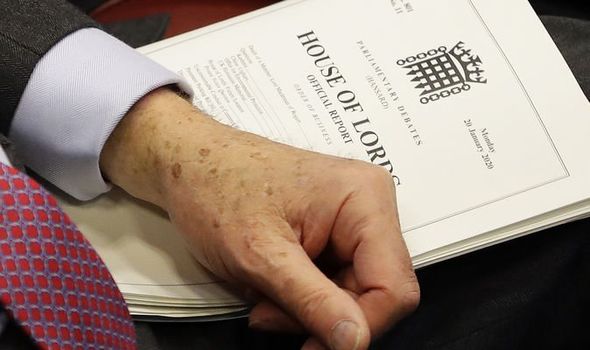 “The Commons has shown that broadcasting the mostly-virtual hearings is possible from day one.

“It’s vital for democracy not to simply be done, but be seen to be done.

“Unfortunately, any kind of democracy is lacking in Britain’s out-dated second chamber. The Lords authorities must get to grips with this rapidly.”

MPs are expected to approve plans for virtual sittings of the Commons when the House returns today following the Easter recess.

Under proposals drawn up by the House authorities, MPs will be able to contribute to proceedings at Westminster – including questioning ministers – through video links.

The initial cost of development amounts to £148,793 and the running costs for maintaining the system are estimated at £369,267 per month, according to a memorandum published by House of Commons Clerk John Benger as part of his role as accounting officer.

Up to 50 MPs will still be able to be present in the chamber – although they are being strongly encouraged to stay away.

To approve the new “hybrid” arrangement, the House will need to sit physically today to vote the plans through.

Strict social distancing arrangements will be in force with MPs required to sit two metres apart.

It is unclear how many will attend, with views divided among those who believe they have a duty to be present and others committed to staying away.

If it does go through, it will mean the new arrangements will be in place for tomorrow’s Prime Minister’s Questions with Foreign Secretary Dominic Raab standing in for Boris Johnson.

The motion states the orders relating to the “hybrid” arrangement will have effect until May 12, although they could be extended by a further motion.

Speaker Sir Lindsay Hoyle said it would be a “historic” moment for the Commons, and that if it went well MPs could move to a fully “virtual” House.

Sir Lindsay said: “It will be a historic moment in our 700-year history to have MPs contributing to Prime Minister’s Questions, urgent questions and statements via video link from the safety of their own homes and offices.”

“If it works, the House will consider extending the measures to a fully virtual Parliament as quickly as possible to include debates on motions and legislation and even a system of remote voting.”

Up to 120 MPs will be able to take part remotely through video-conferencing.

Experts from the National Cyber Security Centre have advised that the use of Zoom will be appropriate as long as the application’s use is carefully managed.

A number of screens will be placed around the Commons chamber to allow the Speaker and MPs in Westminster to be able to see their homeworking colleagues.

MPs who wish to participate in proceedings will need to notify the House Service in advance and there will be a list of those chosen and the planned order in which they will be called.

Backbenchers will, as usual, be drawn at random although the Speaker will ensure opposition spokesmen and women and the relevant select committee heads are able to take part.

The initial system does not cover remote voting, although officials are working on developing a secure system which would also have to be approved by the House before it could be adopted.