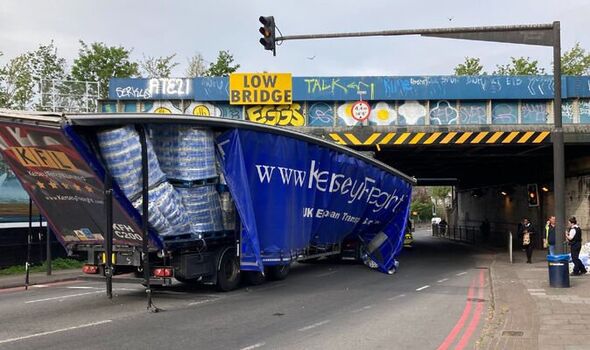 Traffic came to a standstill and a number of roads were closed in the area due to the incident in Lewisham. A lorry hit a railway bridge between Verdant Lane and Manor Lane on the key road in the area, shutting part of the South Circular in both directions.

Emergency services were called to the scene around 8.10am on Thursday morning to respond to the incident.

Images showed it involved a Kersey Freight Limited lorry carrying toilet rolls and there were no reports of any injuries.

However, the incident left thousands of toilet rolls exposed to the elements as photos from the incident show the lorry’s container was ripped open.

One passer-by, John Stevens, shared photos of the incident on Twitter earlier today.

He tweeted: “Ooops… toilet roll lorry in the s*** on the south circular.”

Mr Stevens issued an update just before 8pm noting that emergency workers were still working tirelessly to free the vehicle.

“They’re currently using a chainsaw to try and take the roof off.”

In the photos, a crane manned by structural engineers is shown stabilising the back of the lorry while workers seek a solution to moving the vehicle.

There are also hundreds of toilet rolls, part of the lorry’s shipment, piled up at the side of the road.

The Metropolitan Police said: “Structural engineers are at the location and are assessing the scene.

“The vehicle remains at the scene.”

The force added that enquiries into the circumstances around the incident are ongoing.

Motorists are still being advised to avoid the area, because as of 8pm the A205 South Circular remains closed due to recovery work.

There is also congestion to Clifton’s Roundabout with further delays along Verdant Lane heading towards Bromley.

Southeastern trains are able to run normally after the earlier disruption.