A driver escaped with his life when his lorry was sent hurtling into a bridge by strong winds.

The HGV was battered by gale force gusts on the M6 near Chorley on Monday morning.

It was sent careering into a concrete structure before bursting into flames in the middle of the road.

Other motorists pulled the driver from the cab and he was treated at the scene by paramedics.

The incident happened shortly before 7am this morning and resulted in the full road being closed at one stage.

Several people have been injured during a period of turbulent weather for the UK.

Three named storms have hit the country in the space of a week, which the Met Office says is unprecedented.

Storm Eunice brought winds of more than 100mph last week and resulted in four deaths in the UK and Ireland. 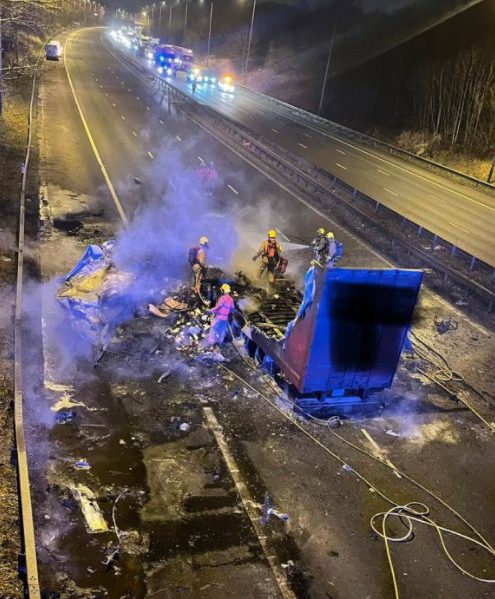 North Yorkshire Fire and Rescue have rescued a number of people from stranded cars on the A61 at Harewood Bridge, with more reports of roads left impassable due to flash flooding across the region.

Several major road bridges have been closed throughout the morning, including the M48 Severn Bridge connecting England and Wales, and the Queen Elizabeth II Bridge at the Dartford Crossing between Kent and Essex.

Hundreds of flood warnings are in place across the country and there is major disruption to the rail network.

Northern trains had to be completely suspended this morning because of stormy conditions.

Two people had a lucky escape when a tree crashed down on their car in Sutton Coldfield and a father and three children avoided serious injury in Bolton when a wall was blown down onto the vehicle they were in.

A yellow wind warning that covers England, Wales and south-western Scotland is in place until 1pm, while an amber warning for Northern Ireland expired at 7am.