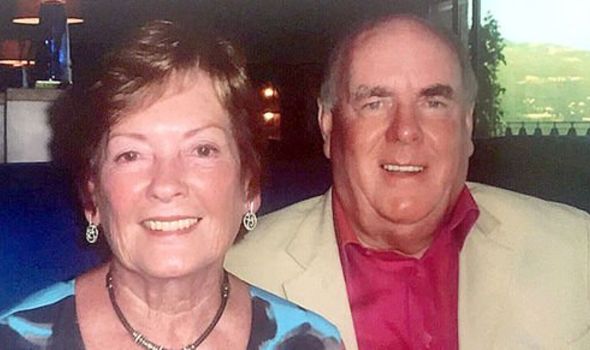 Lawrence Nickerson, 79, and wife Ann, 75, were returning home from a meal at an Italian restaurant when they were struck by a car, which then failed to stop.

Mrs Nickerson was killed on the spot. Mr Nickerson survived four days in hospital before dying.

Police are appealing for any dash cam footage of the horror outside the Punch Bowl pub on Cradlewell bypass in Newcastle upon Tyne at 7.20pm on Saturday November 23.

The grandparents had spent a lifetime together at home in Heaton, Newcastle – and at work.

They set up a bakery in Shiremoor, North Tyneside, and ran it for 42 years.

The childhood sweethearts married in a spring wedding in Gateshead in 1960 and were planning a family celebration for their diamond wedding anniversary next year, followed by Mr Nickerson’s 80th birthday. The couple’s devastated family said in a statement: “Our whole family has been left inconsolable by the loss of Ann and Lawrence.

“They were our parents, grand-parents and our best friends.

“For our loved ones to be taken from us in such a horrific and tragic way, we will be forever changed and mourning this loss.

“They raised three children together while working hard to build up their own family business, Clarks Home Bakery. The business went on to provide for the entire family. Next year we were preparing to celebrate their wedding anniversary.”

The statement added: “They were both extremely healthy and independent for their age, with Ann not taking any medication, not even paracetamol.

“They travelled all over the world, striking up conversation with everyone they met and making friends everywhere they visited.”

Sergeant Matt Sykes, of Northumbria Police, said: “This is a terribly upsetting case which has resulted in the tragic death of two people. I want to thank all the witnesses who have come forward so far and helped us.

“However, we still need dash cam footage to help us formulate a picture of the events leading up to and after the collision.

“If you were in the area at the time of the incident and you think you can help, please get in touch.”