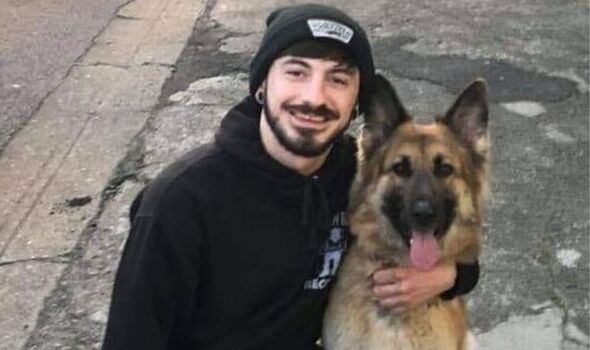 A loyal dog refused to leave a riverbank after her owner entered the water and disappeared only for his body to be discovered five weeks later.

Nicholas Degraff’s body was discovered by a dredger vessel in the sea off the Cumbrian coast having mysteriously ended up in the River Derwent, an inquest heard.

Nicholas was reported missing on December 12 of last year after his “best friend”, Leah the Alsatian, was found at the side of the river and appeared reluctant to leave. The 23-year-old welder had spent the previous night with friends and was last seen on CCTV at 5.17am walking his dog through Great Clifton, reports Lancashire Live.

A widespread search launched for the heavy metal fan by his family and friends found no sign of Nicholas and, on January 21 of this year, a dredger found his body in two halves in the sea at the Port of Workington.

An inquest held today (November 8) at Cockermouth Coroner’s Court heard that Leah was found just before 12.36pm on December 12. The dog was said to be “barking at the river and eager to stay” by the bank where an entry point into the water was visible. The rope Nic had used as a dog lead was found in the water.

A police investigation was launched, with Nic being spotted on CCTV in Great Clifton after being shown a route back to his home in Oxford Street by a man called Brian Park. Nic’s Snapchat account last registered its location at the riverbank and his bank card and mobile phone were not used after that date.

In a statement, Detective Inspector Hayley Wilkinson, of West Cumbria CID, said she was called to the Prince of Wales Dock in Workington at 11.36am on Friday, January 21, after a dredger operating in the port had picked up “half of a body”.

“The lower half of a body wearing black jogging bottoms and black work boots had been found [in the hopper],” DI Wilkinson said.

Nicholas’ parents were informed of the discovery and they identified the boots on the body as being like those worn by their son when he went missing. The clothing also matched what he had been wearing. His mum Hilary, who attended the inquest alongside his dad Malcolm and their daughter Charlotte, said in a statement that her son had been a “cheeky and happy little boy” as a youngster. He attended Northside Primary School and Stainburn School before completing a welding apprenticeship at Gen2.

Nicholas, who was born in Whitehaven, got a job with Balfour Beatty, working at Sellafield, but was made redundant during the Covid lockdown. He then found employment with BAE Systems in Glasgow before securing a job closer to home in Maryport.

“He had a passion for cars and was renovating an old classic car with his dad which they took to car shows,” Mrs Degraff said in her statement. “All his life he wanted a German Shepherd dog and in 2018 he brought Leah home who became his best friend and they both went everywhere together.”

Post mortem toxicology tests revealed that he had some alcohol and cocaine in his system. The medical cause of death was given as immersion.

Returning a narrative conclusion, Coroner Kirsty Gomersal described Nicholas’ death as “a mystery” and said: “There’s only Leah that can really tell us that – if only dogs could talk. That is the greatest mystery of all – how did Nic come to be in the river is a mystery and that is something only Leah would be able to tell us.”

Sister Charlotte said she would remember her brother for his “fun-loving, cheeky and mischievous attitude”.

“He was really loud, he used to say things like ‘you’ll never guess what’s happened but I didn’t do anything or it wasn’t my fault’. Just his stories that used to make me cringe at the best of times. But he used to come home and he would always have a story,” she said.