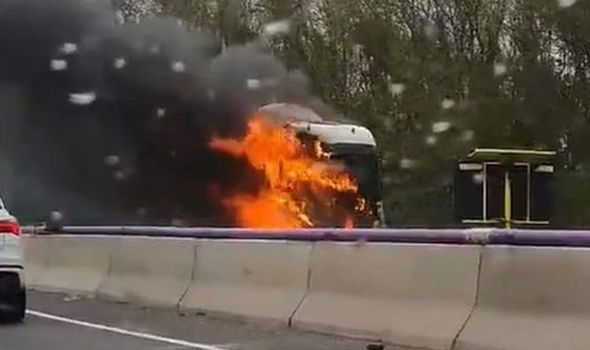 There are tailbacks of around five miles on the northbound carriageway due to the blaze at junction 15 for Northampton south and Roade. The HGV broke down at around 9.10am and then burst into flames.

Queues are now back to junction 14 for Milton Keynes, Buckinghamshire – a stretch Highways England says will take motorists over an hour to get through.

Fire services are still in attendance of the blaze.

A spokesman for Highways England said: “Traffic travelling from further afield and heading for the midlands may wish to use the A1M and A14 to avoid the congestion.

But these alternative routes are also congested.

A spokesman for Buckinghamshire Fire and Rescue Service has confirmed that there is nobody inside the lorry and that thankfully, there has been no mention of any injuries.

He said: “There has been the use of two hose reels and two breahting apparatus.

“But there is no mention of poeple being involved in the incident, so there is nobody trapped inside the lorry and no injuries.”