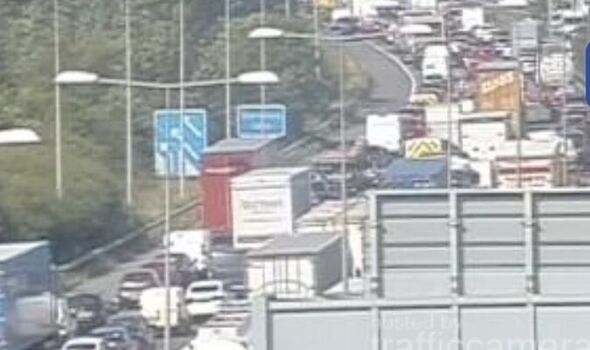 National Highways confirmed that the M11 in Essex is closed northbound between J7 (Harlow) and J8 (Stanstead Airport) due to a serious collision. Emergency services are at the scene. Essex Police estimate it will take 60 to 90 minutes to clear all vehicles from the stretch with lane four opening to relieve vehicles trapped in queues.

The force said in a statement issued just after 3pm on Friday: “We are at the scene of a collision on the M11 between the junctions for Harlow and Stansted.

“It was reported shortly after 2.05pm today.

“The northbound carriageway is closed between junctions 7 and 8.

“Please avoid the area if you can and plan your journey.”

National Highways is advising motorists to follow the solid diamond diversion symbol on road signs, exiting at J7 Northbound onto the A414 west towards Harlow, continuing on the route to the A414/A10 roundabout.

At the roundabout take the second exit onto the A10 roundabout and continue on the A10 through Ware, Thundridge, High Cross, and Colliers End to the A1/A120 roundabout.

On reaching that roundabout take the third exit onto the A120 and continue on the A120 through Standon and Little Hadham, re-joining the M11 at J8.

The agency has reported delays of 60 minutes and about nine miles of congestion.

A spokesman for Essex Police said between two and five vehicles were involved in the collision though this could rise to seven.

The force said in a statement: “We need anyone who saw anything or has any dash cam footage to contact us.

“If you have any information you can submit a report online at essex.police.uk quoting incident 669 of 17 June.