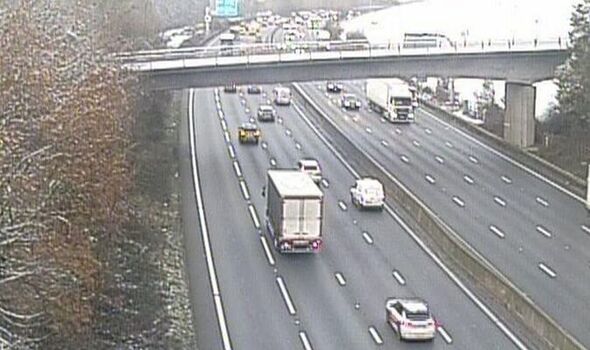 A crash on the M25 has sparked travel chaos for motorists in snow and icy conditions, with up to nine miles of queues on the anticlockwise carriageway. Traffic ground to a half shortly before 7am this morning a short distance after junction 7 for the M23. Motorists had tpo wait for around 30 minutes before they were able to continue their journey. The crash causing the chaos happened two miles before junction 8 at Reigate to junction 6 at Godstone. There is also heavy traffic leading to the M23 northbound.

Traffic data service Inrix said: “Long delays and queueing traffic for nine miles due to earlier accident on M25 anticlockwise from two miles before J8 A217 (Reigate) to J6 A22 (Godstone).

Shortly before 9am, traffic in the impacted started to return to normal following the earlier crash.

The latest update from Inrix read: “Traffic easing, earlier accident on M25 anticlockwise between J8 A217 (Reigate) and J7 M23.”

The Met Office issued a yellow weather warning for ice for Surrey, running until 11am today, although it is unclear if ice played a part in this morning’s crash.

The national forecaster began at 9am yesterday and warned hat “lying snow and icy patches will lead to difficult travel conditions during Monday and into Tuesday”.