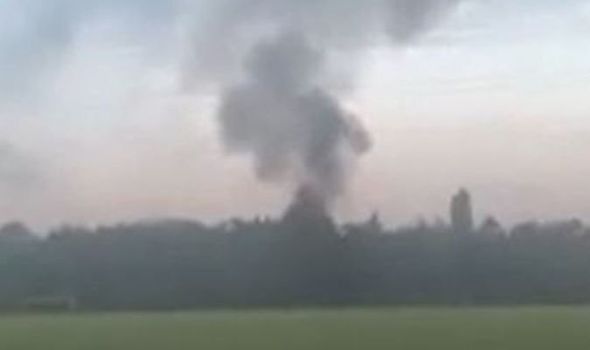 Three lanes were closed on the clockwise carriageway to allow emergency services to deal with the blaze, which happened near Junction 10 for the A3 and Wisley in Surrey. The incident occurred at around 6:30am this morning.

A smoke plume above the M25 could be seen several miles away in Byfleet at 6:45am, 15 minutes later.

Surrey Roads Policing Unit said on Twitter: “We are dealing with a vehicle fire and currently have 3 lanes closed while @SurreyFRS are dealing.

“11 towards 10 also has lane closures due to the fire.

“Please avoid the area if possible.”

Inrix Traffic and travel service, said of the incident: “One lane closed, severe delays and queuing traffic for 12 miles due to earlier car fire on M25 clockwise between J10 A3 (Wisley Interchange) and J11 A320 St Peters Way (Chertsey).

“Congestion to before J9 (Leatherhead), and the A3 Ripley Bypass back to Burntcommon northbound towards.”

National Highways said the vehicle was recovered shortly after 8:30am after fire crews extinguished the fire.

All lanes reopened at 9am with traffic running past the earlier vehicle fire scene.

However, there are still severe delays of more than 90 minutes between junctions 10 and 11 due to the prolonged lane closures.