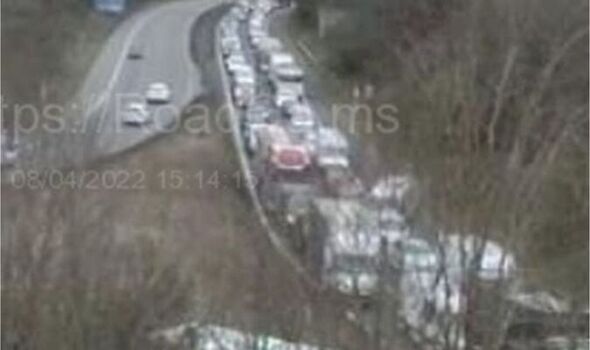 The road is blocked for emergency services to attend the scene. So far, three people have reportedly suffered injuries with one believed to have been taken to hospital.

The road has been closed since around 2.15 pm.

According to Highways England, stationary traffic is being reported because of the road closure with three miles of congestion on approach.

On Twitter, they wrote: “Traffic is currently stopped on the #M25 anti-clockwise between J4 #Bromley and J3 #M20 due to a multi-vehicle collision.

“Emergency services and Traffic Officers are at the scene. There is currently 3 miles of congestion on approach causing 30 min delays above normal travel time.”

A farm vehicle is believed to have been one of the vehicles involved in the crash.

One person has been taken to hospital.

A South East Coast Ambulance Services spokesperson said: “We were called to reports of a multi-vehicle RTC on the M25 between Junction 4 and 3 at approximately 2pm today.

“One patient has been taken to the hospital but the incident is ongoing and we remain at the scene.”

Meanwhile, a spokesperson from Kent Police said: “Kent Police was called at around 1.50 pm on Friday 8 April to a collision involving a farm vehicle and a car on the Swanley Interchange. Officers and paramedics are at the scene where the three occupants of the car have received treatment for injuries described as minor.

“The carriageway remains partially closed while arrangements are made to recover the vehicles.”

Traffic was released at around 3.30pm but lane one remains closed for recovery and there are currently delays of around 45 minutes.