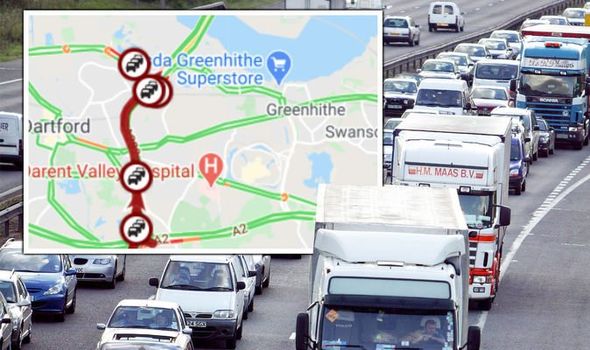 Traffic was stopped at junction 3 for the A282 northbound due to the crash. Emergency services attended the scene along with Highways England traffic officers.

A picture shows queues of vehicles stuck on the motorway.

The traffic has since been released but Highways England warned of three miles of congestion.

One driver caught in the tailbacks tweeted: “Any news on the tunnel opening?

“I’ve been here 30 mins and my morning coffee and bacon sarnie are about to cause another roadside incident back here at the Dartford on ramp!”

Another motorist wrote: “There is no moving traffic. Do you know when the tunnel will be back open?”

A third said: “Slow moving???? Been at a standstill for 15 minutes now. What has happened?”

In a tweet at 7am, Highways England said: “Traffic is currently stopped on the #M25 J3 for the #A282 northbound #DartfordCrossing due to a collision.

“Highways England Traffic Officers are on scene working with the emergency services.

“There are 30 minute delays due to this #A282 #M25 incident at #DartfordCrossing.

“There is currently 2 miles of congestion on the approach.”

In a later update, Highways England added: “The incident has now been cleared from the carriageway and traffic is being released.”