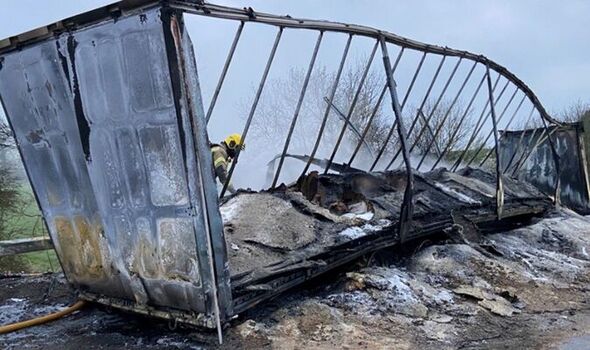 The vehicle caught fire on the M4 between Swindon and Chippenham this morning, forcing authorities to close two lanes as emergency services tried to put out the blaze.

The lorry fire has caused nearly six miles of congestion at rush hour on the road between junction 16 for Swindon West and junction 17 for Chippenham.

Traffic is being held in both directions, with queues building up around the scene.

National Highways told motorists to expect delays of up to one hour as emergency services tried to put out the fire.

The vehicle caught alight on the Westbound side of the M4.

Traffic monitoring site Inrix said: “All traffic being temporarily held and stationary traffic due to vehicle fire on M4 in both directions between J16 A3102 Swindon Road (Swindon West) and J17 A350 ( Chippenham ).

“Cameras show traffic being held temporarily in both directions whilst fire is attended on the westbound side.”

Road users are being advised to consider alternative routes if possible.