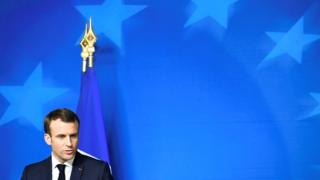 French President Emmanuel Macron has proposed a series of reforms to ensure the future of the European Union.

In an opinion piece being published around Europe, he calls for the creation of an agency to protect the bloc against cyber-attacks.

Ahead of the European elections due to take place in May, he advocates a ban on the financing of European political parties by foreign powers.

He also calls for the reform of the passport-free Schengen area.

All those who want to belong to Schengen should accept both stricter controls on outer borders and a common asylum policy for migrants, he said.

The article, which talks of the French president’s hopes for a “European renaissance”, is published in newspapers in all 28 EU member states.