Speaking to friend and tennis star Serena Williams on the Duchess’ new podcast Archetypes, Meghan explained how the terrifying event unfolded when she had been visiting the Nyanga township in Cape Town, South Africa with Prince Harry in 2019. She described how the incident had left helpers “shaken” and “in tears”, adding: “As a mother, you go: ‘Oh, my God, what?'”

Meghan’s fans were horrified by the story, with @ishenarobinson sharing on Twitter: “It really made me almost cry.

“Especially when she finished by saying they HAD to go to the second engagement and leave their baby after that.”

@southernsiren added: “I’m not a mom but gosh I can’t imagine the fear. Thankfully both little ones are ok.”

The Duchess explained that Archie was having a nap while she and Prince Harry went for an “official engagement”, after which they were told: “‘there’s been a fire at the residence. There’s been a fire in the baby’s room’.”

She explained: “We get back, and our amazing nanny Lauren is in floods of tears. She was supposed to put Archie down for his nap and she just said: ‘You know what? Let me just go get a snack downstairs.'” 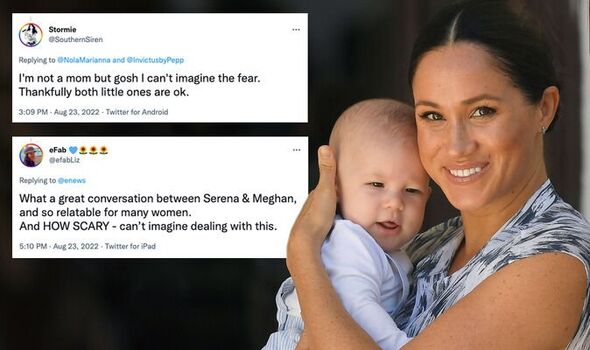 Meghan added: “In that amount of time that she went downstairs, the heater in the nursery caught on fire. There was no smoke detector. Someone happened to just smell smoke down the hallway, went in, fire extinguished. He was supposed to be sleeping in there.”

Meghan told Ms Williams: “As a mother, you go, Oh, my God, what? Everyone’s in tears, everyone’s shaken. And what do we have to do? Go out and do another official engagement.”

Many fans were terrified by the story.

@efabliz said: “HOW SCARY – can’t imagine dealing with this.” 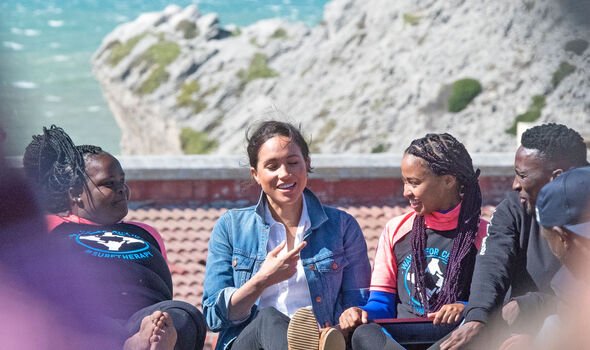 Meanwhile @dandylione sympathised with the pair having to go on to continue their tour: “What an awful thing to happen. No [wonder] they were so incredibly raw and emotional during this tour.

“New parents and then having such a close call w/your small baby.”

The Duchess recounted asking if they could tell people what had happened, but they decided not to as “the focus ends up being on how it looks instead of how it feels”.

She said: “Part of the humanising and the breaking through of these labels and these archetypes and these boxes that we’re put into, is having some understanding of the human moments behind the scenes that people might not have any awareness of, and to give each other a break. 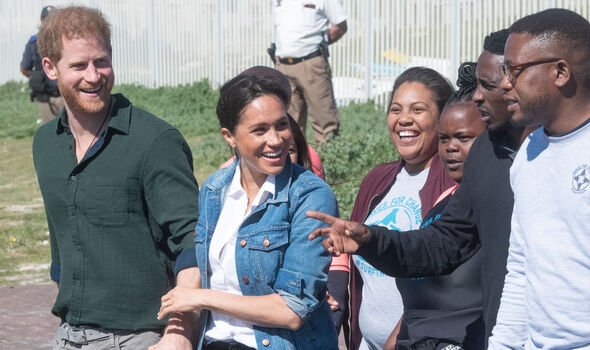 “Because we did– we had to leave our baby.”

The eventful September trip was the first the couple had shared since the birth of Archie Harrison and saw the Duke and Duchess meet anti-apartheid activist Bishop Desmond Tutu.

Their visit to Nyanga was to meet with The Justice Desk, a group that teaches self-defence and empowerment to vulnerable children, many of whom have suffered trauma.