An explosion tore through a building in central Madrid on Wednesday, leaving at least two people dead and six more wounded, the Spanish government said, as rescuers scrambled to treat the injured.

The mayor of Madrid, José Luis Martínez-Almeida, told local news outlets that the explosion appeared to be the result of a gas leak. He also cautioned that the death toll was preliminary, and the number could rise.

The Interior Ministry said in a statement that it was investigating the cause of the blast, but added that a “strong explosion” had left at least two people dead and that one of the six injured was in serious condition.

Prime Minister Pedro Sánchez of Spain acknowledged the explosion in a post on Twitter, and shared a warning from the police urging residents to stay away from the scene.

“Unfortunately we have to mourn the death of several people,” he wrote in a subsequent post, noting that he had spoken with the mayor to express his support and solidarity. “All our regret and love to the families of the deceased and injured.” 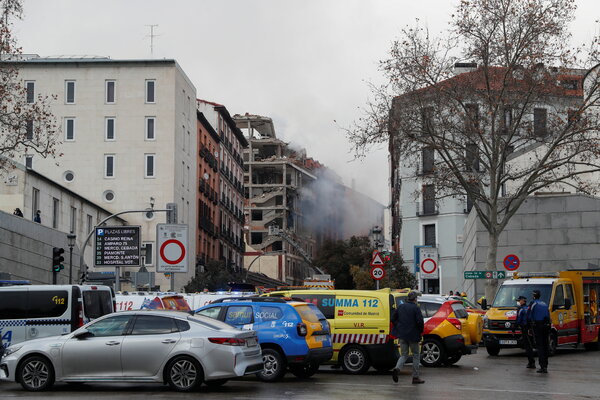 Videos aired on local news outlets and shared on social media showed smoke rising from the damaged building, where the facade appeared to have been torn off the top six floors, and debris visible in the street. Dozens of firefighters and emergency workers could be seen treating the injured near the site.

In another video, taken from inside a neighboring building, the widespread impact of the blast was clear. Cars parked on the street in front of the building appeared mangled, their roofs partially collapsed and covered in a thick layer of brown debris.

Smoke could be seen pouring from the heavily damaged structure that appeared to bear the brunt of the blast, while the windows of the building across the street were blown out. Debris littered the street.

The explosion happened on Calle Toledo, a historic street in central Madrid between the Puerta de Toledo, a local landmark, and the Plaza Mayor. The building is next to a school, which said on Twitter that no one had been injured there.

The destroyed building is part of a religious complex that includes the school and sits next to a nursing home whose residents have been evacuated, according to Spanish news outlets.

A nearby cafe posted a photograph of several residents of the nursing home taking shelter there, to let family members know they were safe.

The explosion comes days after Madrid suffered its heaviest snowfall in 50 years, which left three people dead and paralyzed large parts of the city.