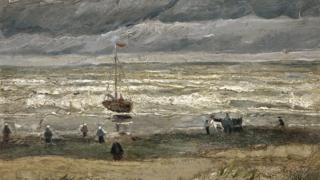 The Camorra crime organisation of Naples is not known for its understated good taste.

Police raids on members’ homes have often revealed a preference for ostentatious, kitsch decoration – the more lavish and garish, the better.

So it is unlikely that the network acquired Van Gogh’s sombre depictions of the Dutch landscape for display on the walls of their homes.

The police in Naples say that they found the two stolen artworks in the possession of one of the Camorra organisation’s branches – the Amato-Pagano clan.

The police say they are one of the most dangerous clans in the region.

They accuse the Amato-Pagano network of involvement in drug trafficking, in alliance with international cartels. Officers said that the clan has up to €20m (£17m; $22m) in assets, including houses, plots of land, and a small airplane.

The home, no doubt, contains many luxuries. But unless the clan has its own in-house art curators, it is unlikely to have provided the conditions necessary to store 19th Century oil paintings without deterioration.

The Van Gogh Museum in Amsterdam says that there is some damage to the works, but they have survived in fairly good condition.

We don’t yet know how the clan got hold of the stolen artwork. Nor whether or not its members had been planning to sell the works on the international black market.

“The investigation confirms that criminal organisations are interested in art works that are both used as a form of investment as well as a source of funding,” says Italy’s Culture Minister, Dario Franceschini.

The art works are now in the hands of Italy’s Guardia di Finanza – or specialist financial police. During a brief display, the force’s deliberately unsmiling officers stood on either side of the recovered works. They managed to disguise any admiration they may have had for Van Gogh’s brushstrokes.