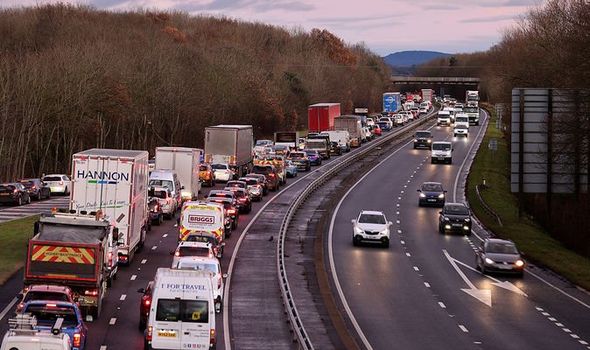 Traffic is congested on the A13 eastbound near Stanford-Le-Hope, Essex, while the road is cleared. Queues are back to the A1089 link for Little Thurrock, Essex.

Essex Travel News confirmed on Twitter: “A lorry has shed its load of concrete on the carriageway between Stanford Le Hope and the Five Bells Interchange.”

There are currently no diversions in place but some drivers are leaving at North Stifford, which is near Grays, to use local roads instead of the A13, Essex Live reports.

The B188 goes eastwards through Orsett, Essex, and eventually comes out to the A1014 junction of the A13 near Stanford-Le-Hope.

Westbound traffic is congested largely due to onlookers.

It is slow from around the A176 for Basildon, Essex, and the rural Fobbing area.

There also isn’t a diversion in place for westbound traffic as motorists are advised to remain in the jam.

The A13 is a major route which links central London with east London and south Essex.

It ends in Shoeburyness, which is on the coast and just east of Southend-on-Sea.

Stanford-le-Hope, which is a town just southwest of Basildon, has around 4,000 residents.

The closure was first reported before 8am this morning (Thursday, December 30) but it is expected to continue impacting traffic into the afternoon.

Essex Police are also on the scene assisting with the recovery.

They said: “We have closed part of the A13 this morning, Thursday 30 December, after a lorry shed its load.

“The eastbound carriageway is closed between the junction for Stanford-Le-Hope and the Five Bells Interchange at Basildon.

“Our officers were first called at 7.50am and are working with partners to clear the road.