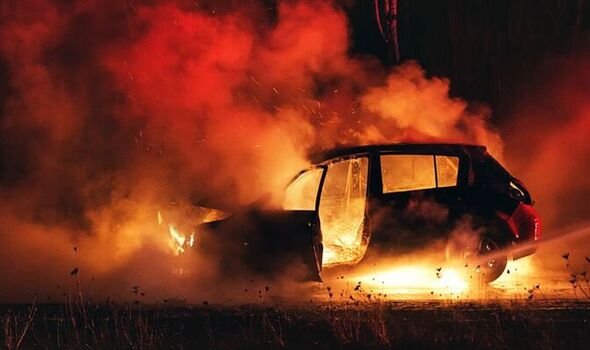 A pensioner with no driving licence attempted to drive a Ford Titanium more than 110 miles to the capital – but it burst into flames on the motorway.

Brian Gillman, aged 66, was paid £150 to complete the journey but, after just a few miles, the car broke down and caught fire on the M1 near Loughborough, Leicestershire.

A court heard emergency services had to attend the scene and the southbound carriageway was closed for more than an hour as a result.

Gillman admitted to police he had been driving the car and that he had been banned from driving since 1997.

He pleaded guilty to driving while disqualified and driving without insurance, reports Leicestershire Live.

But the 18-week prison term was suspended for 12 months at Leicester Magistrates’ Court.

The judge told Gillman: “You’re not going to prison today but we are going to give you an 18-week custody sentence, suspended for 12 months.”

Gillman was also banned from driving for the next 18 months and will still have to take a further driving test to get his licence back. He was also ordered to pay £85 costs and a £154 victim surcharge.

Gillman, who has cancer, claimed he had been working as a cleaner for an employer who asked him to drive the car to the capital and that he didn’t want to say no.

But the vehicle caught alight due to a “mechanical failure”, Leicestershire Fire and Rescue said.

Peter Bettany, prosecuting, said: “He was aware he was driving whilst disqualified. He had been banned by a court in the Avon area in 1997 and had to resit his test.”

The lawyer said the defendant had never retaken his test.

Gillman, from Kegworth, Leicestershire, had been previously caught driving while disqualified in 2009 and then again in 2019, which “would have been a reminder” to him that he was disqualified.

Sajid Munir, representing Gillman, said his client was asked by his employer to drive the car to London. Mr Munir said: “He didn’t want to tell them he was disqualified.”

He added that Gillman’s wife had left him two years ago and one year ago, he found out he had cancer in his neck that was now “destroying him day by day”. Mr Munir added: “He’s made a mistake for which he is going to pay dearly.”