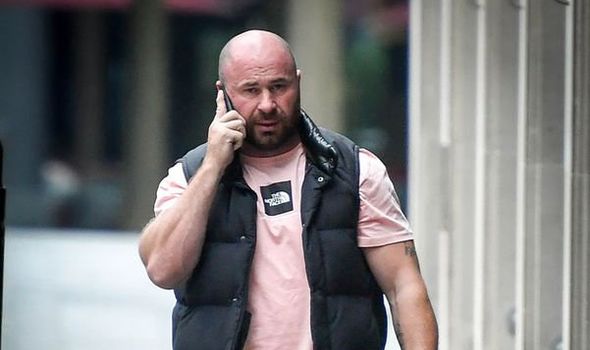 Thomas Joyce, 44, was one of the men spotted in a video uploaded to YouTube which captured a fight between two younger men. As the fight went on however, a wider brawl broke out, with Joyce seen throwing punches in the clip.

Police investigated the video, identified Joyce and arrested him.

A court yesterday heard Joyce is part of a travelling family, which was in dispute with another travelling community in July this year, and was seen in the footage to throw punches in the fracas on a basketball court.

No other men have been arrested or prosecuted, Manchester Evening News reports.

Joyce was spared jail at Manchester Crown Court even though a judge branded the scenes “an unedifying spectacle”.

The defendant was instead ordered to pay just £500 after admitting a section 4 public order offence, namely using threatening, abusive or insulting words or behaviour.

At 44-years-old, you’re really too old to behave like this, you must surely have better things to do with your time

Passing sentence, Judge Hilary Manley said: “It’s a bunch of men running around a basketball court throwing punches at each other.

“You (Joyce) took part in some organised violence between two groups of people, you threw some punches.

“It was an unedifying spectacle, really.

“At 44-years-old, you’re really too old to behave like this, you must surely have better things to do with your time.

“You’re not setting a good example for the young men in your community.

“Make sure you pay that and don’t get involved in this sort of thing again.”

The scrap, which happened on July 27 in Middleton, Greater Manchester, involved a large group of men. The others who got involved have not provided statements to the police, nor have they been arrested or charged, the court heard.

Greater Manchester Police had been looking into other videos which had previously been posted online where “threats or challenges” had been made.

Brian Berlyne, prosecuting, said: “It appears that it (the footage) has been uploaded by various observers of a fight between two members of the external family, Joyce being one of the families.

“Police have identified two external families in a long-running dispute.

“This took place on a basketball court on Langley, in Middleton.

“Thomas Joyce is identified as being one of the parties – you can see he is wearing a light blue vest and he takes it off during the fighting.

“Several people are involved in the violence, the defendant throws punches, though he did not take part in the footage of the man who was being kicked whilst he lay on the ground.”

The defendant, from Middleton, answered no comment to questions asked of him during a police interview.

He was said to have a number of previous convictions for violence, affray, public order offences and burglary.

“Clearly this sort of video should not take place – though they were willing parties.

“Mr Joyce played a relatively minor role and has been out of trouble for many years.

“There have been some difficulties in the travelling community.

“He has been making efforts to try and calm matters down.”

The basketball court was in a private place, owned by the travelling community, the judge heard.