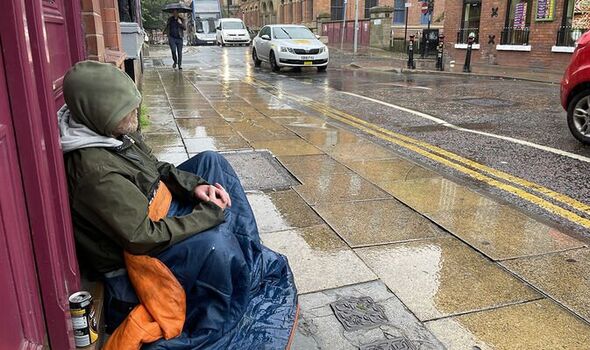 James, who asked to change his name to protect his identity, has a comfortable home but says the pile-up of bills and debts has left him in a desperate situation. The 54-year-old man believes he’ll lose the property “very soon” as he can’t keep up with energy bills and so he has instead slept in a wet sleeping bag on the streets of central Manchester lately.

He said: “I’ve still got my gaff, but what’s the point of living there when I can’t afford gas, electric and can’t get no help.

“I feel like I’m going to lose it soon, very soon. Since all them bills come in I’ve been on the streets five, six weeks, just to get used to it again, because I know it’s gonna happen again.

“I’ve got a new flat and I’m in arrears on that, my council tax comes through and my electricity and gas have gone through the roof.”

It is predicted that more than 66,000 people will be homeless by 2024 due to the rise in cost of living and benefit freezes, according to recent research by housing charity Crisis and Heriot-Watt University in Edinburgh.

James himself was homeless for 25 years until he got a place to stay in September thanks to Manchester City Council and a housing agency.

But the rising cost of living has affected James, and other rough sleepers, including 52-year-old Darren Dowling.

Darren lost his leg in an accident that left him unable to work, and then lost his flat.

He said: “Manchester has changed over the years, buildings popping up everywhere, but there’s still not enough places to put homeless in,” he says.

“People are going private, and when they’re going private they can’t afford to rent and they’re getting kicked out. There’s not money to go around from social, the DWP (Department of Work and Pensions).”

A Greater Manchester Combined Authority spokesperson said: “ABEN was launched in 2017 with a clear ambition: to end the need for rough sleeping in Greater Manchester. The service offers shelter and personal support on an emergency basis to people who would otherwise be spending the night out on the street, and those accessing ABEN are given help with basic needs, access to healthcare, and move-on options.

“Twenty-one organisations across Greater Manchester provide accommodation including dedicated provision for women, LGBTQ+ people, those with pets, and people with No Recourse to Public Funds. Safety, assurance, and scrutiny practises are in place across all ABEN locations, with a view to ensuring that everyone who uses the service can get the support and the security they need.

“More than 500 spaces of emergency accommodation are always available throughout the whole year to anyone who needs them, with extra provision put in place at times of greater pressure or risk, including the winter months.

“From April to December 2021, 2,418 accommodation placements were made in ABEN services, and 41 per cent of people moved on positively into other housing settings, the majority to supported accommodation and private rented tenancies.

“ABEN has now developed into a multi-million pound project, with investment from all parts of Greater Manchester public services and national Government. It is one part of a wide-ranging series of measures to address the challenges of housing inequality and homelessness in our city-region, including our Homelessness Prevention Strategy, and Greater Manchester Leaders recently agreeing funding commitments worth £37.1m to support ongoing accommodation and support programmes for the next five years.”