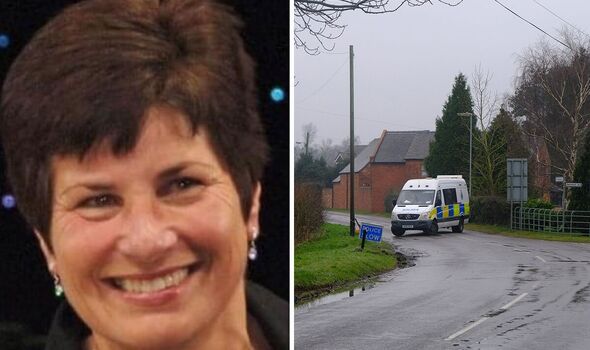 A pensioner was stabbed multiple times on her own driveway, an inquest heard yesterday.

Valerie Freer’s body was found in a pool of blood by her horrified husband of 46 years Derek, who returned home having walked their dogs. Since the tragedy, the assailant was identified as Argentinian national Alex Verdu Munoz, who died while being held at Strangeways prison in Manchester.

Mrs Freer, who was a dog breeder, suffered 16 stab wounds and 10 puncture wounds, as well as scratches around the neck area. She had been stabbed through the neck and her hands were bound with cable ties.

The 68-year-old had problems with one of her legs and initially, her husband thought she had fallen and banged her head but the inquest, held at South Staffordshire Coroner’s Court, heard the gruesome details of the attack.

Mr Freer, who married his spouse in 1975, called the emergency services and, though the ambulance arrived within minutes, the woman was pronounced dead at the scene in Whittington, Staffordshire.

There was evidence of a disturbance at the front door and in the hallway, with blood found in the house, Staffordshire Live reports.

South Staffordshire coroner Andrew Barkley ruled Mrs Freer died from stab wounds to her neck and recorded a verdict that she was unlawfully killed.

But he heard the suspect, named by police earlier this year though not at the inquest, died in jail in May – three months after the killing.

Munoz had previously hired a Peugeot at Heathrow Airport, seen on CCTV, ANPR and dashcam footage near Whittington, and the car was traced to Slough, Berkshire, on the same day of the stabbing.

Thames Valley Police boxed it in but Munoz deliberately crashed the car and ended up in hospital. Officers found a knife in a suitcase in the car, which he had brought over from Argentina. It had Mrs Freer’s blood on it and his DNA on the handle.

There was also black tape under the driver’s seat, as well as cable ties and blood on the door handle and sleeve of a jacket. It was found Munoz had rented an Air BnB in Whittington and had been staying there since February 10.

Inside, police found handcuffs, cable ties and items used for picking locks. He was subsequently arrested and charged with Mrs Freer’s murder.

Before she died, Mrs Freer was a “fit and healthy” woman, with her only problem being the injury to her leg.

She and her partner had lived in the bungalow since 1985 and had four dogs in the house.

Mrs Freer was president of the British Samoyed Club for lovers of the breed, which is similar to a husky.

She had a wide circle of friends and was prominent in the dog-showing community nationally and internationally. The couple met when they were teenagers and she asked him out for a drink.

At the time of her death, Mrs Freer’s family released a statement saying: “Words cannot even begin to describe how truly devastated we are to have lost our wonderful Val. Her illuminating smile and infectious laughter would light up any room.

“An incredibly beautiful lady both inside and out, she was always so loving and caring to all those around her. Val is loved infinitely by family and friends around the world. She will be hugely missed, remaining forever in our hearts.”