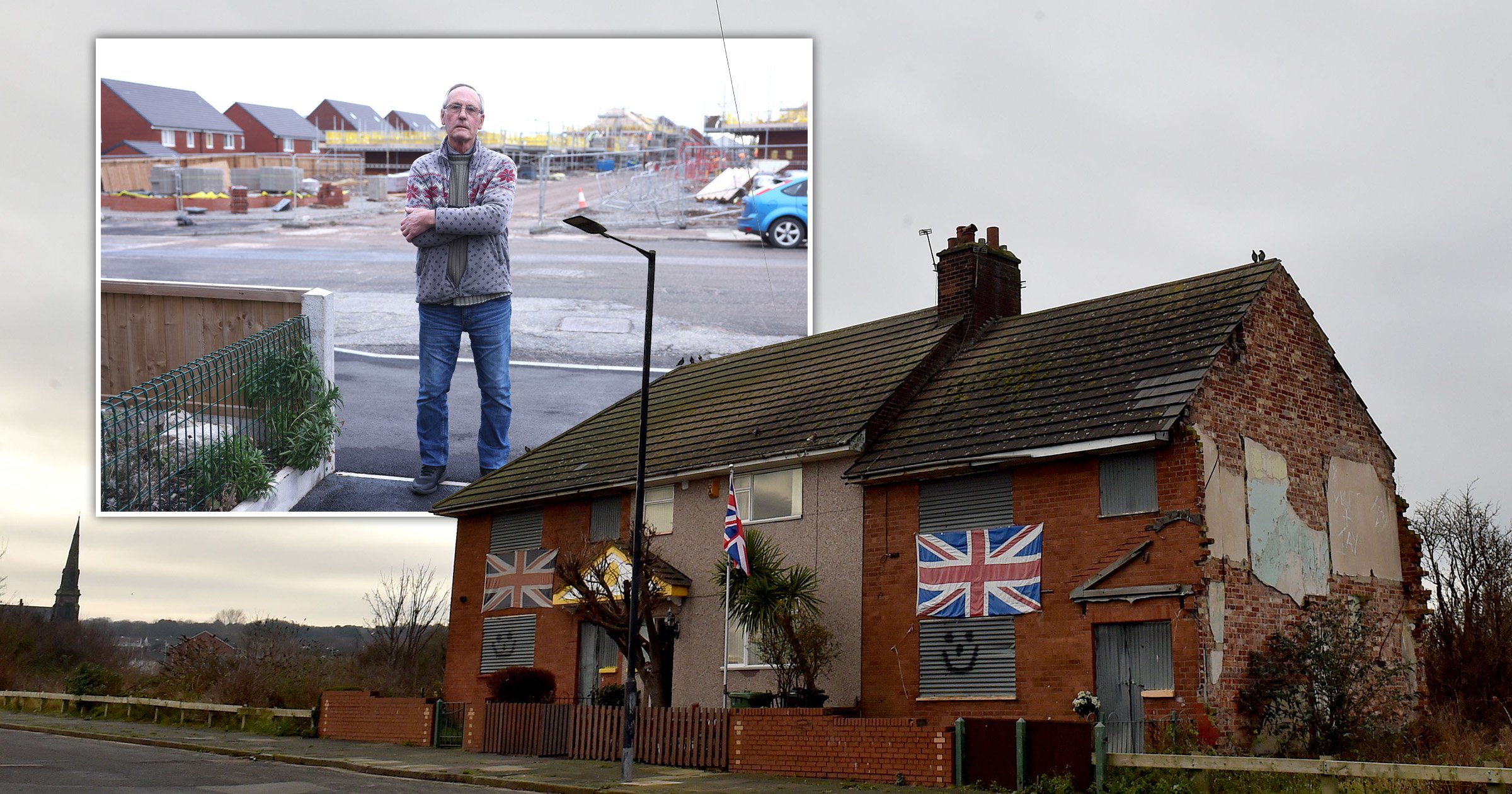 A man who refused to let his childhood home be demolished returned from hospital to find developers had built a new estate around him.

Charlie Wright, 70, had for years refused to sell his four bedroom property in the Wirral, despite all his neighbours selling up and moving out.

The area became an open wasteland as all the other houses were flattened and an isolated Charlie was attacked and hit with a hammer in his own home.

After a prolonged hospital stay, he got back to discover he’d acquired 178 new neighbours as the new homes had been built anyway.

He said: ‘I’d spent most of the last year in hospital. When I left, they told me “let’s go and see your house.” I couldn’t believe it, I said “look at all these houses here”.’

Charlie refused to move away from the area because he had grown up in the Ilchester Road home with his parents and his eight brothers and sisters.

Over the years, his solitary house – with its Union Jack flying outside – became a curious sight near Birkenhead North station.

It was once part of an old estate known as River Streets, so called because the streets were all named after British rivers.

Now, the house is a detached property – after the removal of the two derelict homes either side – and the outside has been given a fresh lick of paint.

Charlie said: ‘I won’t move from here. My family has had this house for 100 years. It was my parents’ house and they raised their children here.

‘Twenty-odd years ago they began pulling the estate down, and the council offered people £2,000 and a house to move to.’

‘I just said, “look this house is not up for sale”. Margaret Thatcher gave the ordinary person the right to buy their council house. There’s nothing to think about, this house will never be sold.

‘The only way anyone will get their hands on this house will be when I’m six feet under.’

Charlie, who was previously chairman of the old estate’s community association, has rarely left the area and says he has never had a holiday in his life.

The retired boilerman, who worked at the nearby Mobil Oil site, said even a trip over the water to Liverpool was a rarity.

He said: ‘It just never bothered me. Living round here, when it was the old estate, everybody knew everyone. It was brilliant, everybody mucked in.

‘It didn’t bother me after they knocked it down. I used to go out every day with my dog, have my mates round. I could sit on the step here and foxes would come up and I used to feed them.’

But having neighbours again has made him feel safer, particularly after the nasty attack that left him hospitalised.

Last December, a thug broke into Charlie’s house, held a knife to his throat while demanding money, and then hit him three times over the head with a hammer.

Charlie suffered life-changing injuries, including memory impairment, and spent the best part of a year being treated in hospital and then at a specialist brain injuries unit.

He said: ‘It doesn’t change the way I feel about living here. I’m never moving out of my house. Before this happened, I’d never had so much as a break-in in the 70 years I’ve lived here.

‘Most of the memories are really good ones. I’m quite happy with myself.

‘I’ve gone from living in a terraced house to a detached house with a driveway, so it’s paid off for me in the end.’