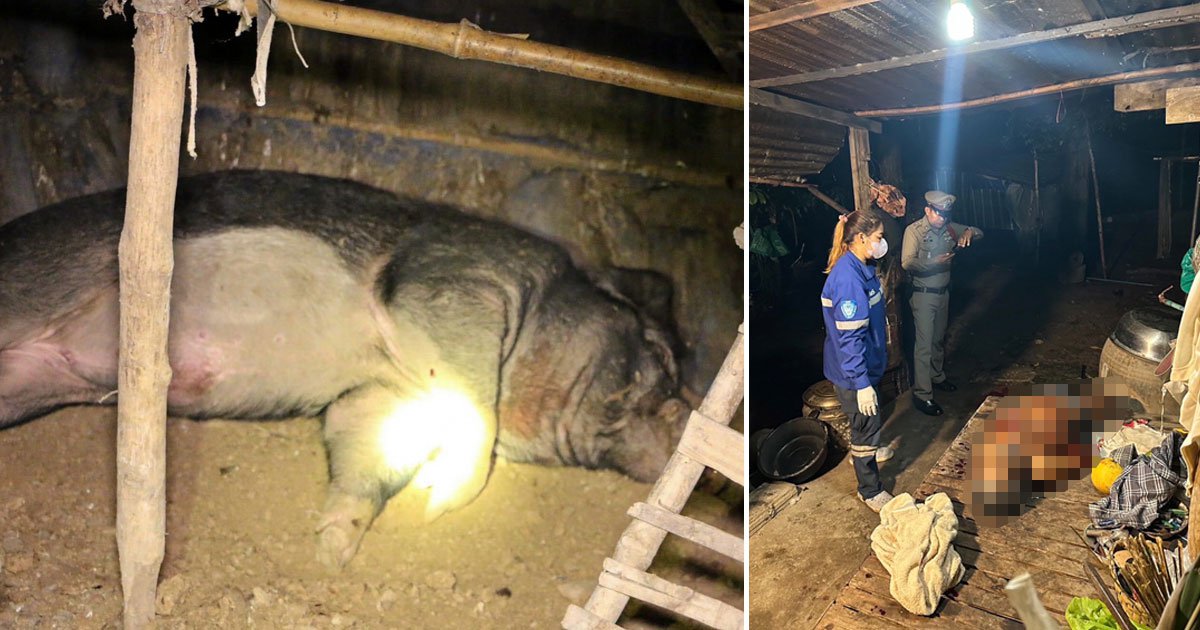 A man who raised a wild boar since it was a baby has been gored to death by his pet.

Amnuay Suriwong, 68, was found lying in a pool of blood after the animal attacked him at home in Kamphaeng Phet province, Thailand, on November 24.

Neighbours told police officers that Amnuay had asked them for help when the beast went on a rampage while he was marshaling it into its pen.

Despite his severe injuries, he managed to call out for help before lying down on a bamboo bench in his backyard.

However, Amnuay passed away before paramedics could arrive.

Paramedics found that the boar had stabbed his inner thigh, leaving two wounds through which he is believed to have bled to death.

Residents later hunted down the boar and shot it to prevent it from mauling anyone else.

Amnuay’s sister-in-law Durian Suriwong, 54, told local media that he had lived alone and bought the wild boar to keep him company.

She said: ‘He would let it roam and graze in the afternoons, after which the boar would be returned to its enclosure. Over time, it grew to a weight of around 120kg, with large tusks emerging from its mouth.’

Despite its fearsome appearance, neighbours said it was tame and never showed signs of aggression until it attacked its owner on Thursday evening.

Durian added: ‘I heard the sound of my brother-in-law chasing the pig.

‘Afterwards, when I went out to look, it turned out that he had already died because he had lost a lot of blood.

‘He has been raising the wild boar since it was small. It was very tame and never hurt anyone. Even the neighbours would bring it vegetables to eat.

‘I hope this serves as a warning to be careful when raising wild animals because we can never be sure of their behaviour.’

Amnuay’s body was taken to the Kamphaeng Phet Hospital for an autopsy while his relatives prepare for his funeral.

Police are not looking for anyone else over the death and the family have not requested an investigation.