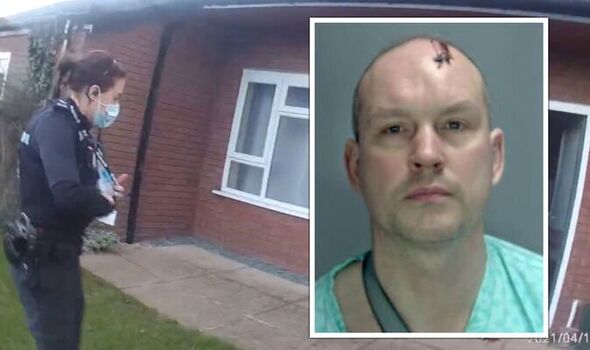 Yesterday at Norwich Crown Court Judge Anthony Bate jailed Crosbie for a minimum of 28 years telling him: “I regard you as a very dangerous man.”

The balding defendant stared straight ahead throughout the hearing, bouncing his left knee up and down. He showed no reaction as he was led to the cells.

He was also convicted of the wounding with intent of Ms Newell and Ms Kray. He had admitted three counts of possessing an offensive weapon. 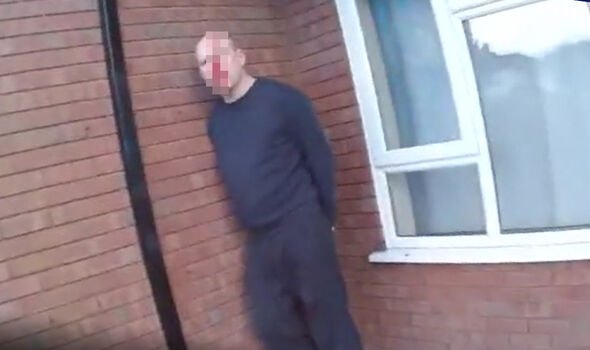 Mr Allsop, of Thorpe St Andrew, Norfolk, was pronounced dead at the scene at 8.18pm on April 14 last year.

After being told his neighbour was dead, Crosbie told police: “That makes me happy, that’s a good thing, that’s the best news I ever heard.”

In video footage recorded by an officer who arrested him on suspicion of murder, he added: “I’m very happy about that, killing people isn’t always a bad thing”.

Yesterday, Ms Newell said in a victim impact statement read to the court by prosecutor Andrew Jackson: “I will never forgive Crosbie for what he did to my family.”

Mr Jackson said that Crosbie had previously been convicted of causing actual bodily harm in 2013.

On this occasion Crosbie punched a security guard at a Job Centre where he had gone to complain about his benefits entitlement and was asked to leave, Mr Jackson said.

Crosbie was previously convicted of threatening Mr Allsop with a knife and hammer for putting some rubbish in his wheelie bin, the court was told.

He had made threats to kill Mr Allsop in front of his probation officer while on a suspended sentence for that offences.

Mr Jackson said there “can be no dispute” that at the time of the murder Crosbie was “suffering from a mental disability”, which was described by a psychiatrist as a “delusional disorder”.

He said it did “not extinguish” the defendant’s culpability.

Mr Jackson said Crosbie said he had drunk around a bottle and a half of wine before the killing.

He said the defendant had mental health issues and was “complying poorly with prescribed medication in the community”.

“You showed callous indifference to Dean’s fate after he had been repeatedly stabbed,” the judge said.

“You left him bleeding on the ground and made no attempt to summon help.”

He said that, in police bodycam footage, Crosbie said the “chilling words” to officers who arrested him on suspicion of murder: “That makes me happy, that’s a good thing, that’s the best news I ever heard.”

Elizabeth Marsh KC, defending Crosbie, said he had expressed remorse since he had been taking medication in custody.