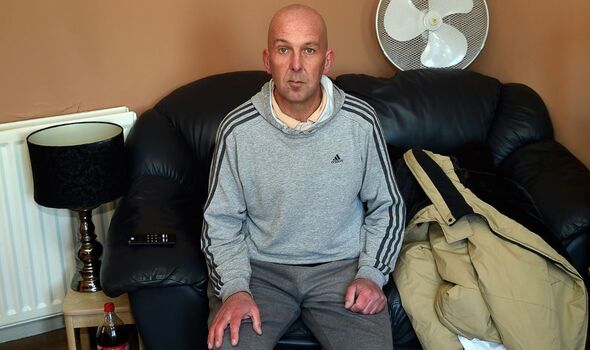 A man with severe epilepsy has slammed the Department for Work and Pensions (DWP) for insisting he is fit to work despite his claims that the condition is worsening.

Ryan Connelly says the DWP has assessed him as having limited capability to work despite having daily seizures.

However, the 47-year-old says his condition makes it impossible for him to work.

He claims the decision has seen him receive lower benefits than he should have over the past two-and-a-half years, causing him to mount up more than £2,500 of debt.

Ryan, from Dumbarton, Scotland, told The Daily Record: “I am getting pushed from pillar to post with my benefits because I don’t know how to work the system because I have worked all my days. When I finished up, I was on the sick for six months.

“At the time, I was on ESA, but now I am on Universal Credit, and I am down as limited capability to work.

“They put me down to that after a telephone assessment from a lady down south who took no longer than five minutes to do it.

“After a couple of weeks, I went down to DWP in Dumbarton, and they told me I was to get Universal Credit, which is around £270 a month alongside PIP.

“Since then, I have been really struggling.

“My doctor and physio said to me that I should be getting different benefits.

“One of the ladies from the epilepsy department at the Queen Elizabeth Hospital told me that I shouldn’t be down as limited capability to work because I simply cannot work with how many seizures I take.

“They have been asking me for paperwork since, so I took my folder down with all my paperwork relating to my epilepsy and my back problems, which I have had two operations for, with the last one being a lumbar puncture.”

Ryan began having seizures in October 2019 whilst working for Smith Engineering in Dumbarton, with his first two seizures happening whilst he was driving.

He told the Lennox Herald the stress of the situation is causing him to have more seizures, commenting: “I took three seizures whilst at work.

“My doctor from then told me to stop working until they knew more.

“After getting EEG tests and my brain scans, they found out that I had epilepsy.

“They gave me medication, but I was still taking seizures.

“They inserted a loop link recorder into my heart because they think I may have an irregular heartbeat as well.”

Ryan’s says his condition is constantly deteriorating, and he says doctors and specialists have informed the DWP of this.

He continued: “They asked me for another letter from my doctor showing that my condition was not improving or deteriorating.

“I went one step further and went to the specialist in the Queen Elizabeth Hospital and he couldn’t believe my benefits hadn’t been sorted out.

“He wrote me a letter stating that my condition has deteriorated, so much more, from when it started.

“I was back in the hospital for four days on November 14 for another EEG scan, and in the first two days, I had nine seizures. Then five or six in the next two days.

“However, when I went back, they asked for another letter. I had already given them all my details. It is upsetting me. I am just constantly getting messed about.

Ryan added: “I have a machine in the house for my loop recorder for my heart which goes directly to the cardiology department.

“It runs on broadband, which I had to get in, which costs over £30. I have to pay this off with my basic benefits.

“All I want is to be reassessed so I can be paid the correct amount of money.

“I have been waiting on a reassessment for two and a half years, and I am just being messed about.

“It has gone on for too long, and all the savings that I did have, from when I was working for 29 years, have gone.

“That is just insulting and humiliating. I have had enough, I am at my wit’s end.

“It is impossible for me to work with the number of seizures I have taken.”

Ryan has raised the situation with Dumbarton MSP Jackie Baillie, who said: “Ryan has worked hard all his life, but through ill health, has had to give up his job.

“It makes me really angry that the DWP has not yet sorted out his benefits and he is still waiting for a reassessment. All the while, his condition continues to deteriorate further.”

A DWP spokesperson said: “Mr Connelly is receiving all the support he is currently eligible for and was recently referred to our Work Capability Assessment provider for a review of his case.

“We are assessing people as quickly as possible as we continue to recover from the impact of Covid-19 and reducing waiting times for claimants is a priority for the department.”