A British man whose kayak capsized while crossing the English Channel has been rescued after he was left stranded for days.

The unnamed paddler, 28, had been left in the open water wearing nothing but a pair of swimming trunks.

He clung to the side of a buoy for two entire days and ate crabs, mussels and seaweed to survive.

The unlucky swimmer was eventually rescued after being spotted by the crew of cutter ship ‘De Madelaine’ from the Dutch town of Urk, according to newspaper De Telegraaf.

Following a ‘disappointing’ morning of fishing, ship captain Teunis De Boer said he ‘saw something crazy’ moving near a buoy in the middle of the sea at around 11am on Thursday and instructed his crew not to get too close.

After grabbing a pair of binoculars, Captain De Boer told Dutch media he was shocked to see the exhausted Brit ‘waving like a madman’ at the crew and swiftly organised a rescue attempt.

Despite facing choppy waters the crew worked hastily to save the stranded swimmer, navigating the rough seas until they were close enough to the buoy to  toss him a life ring, which he grabbed onto with his last ounce of strength. 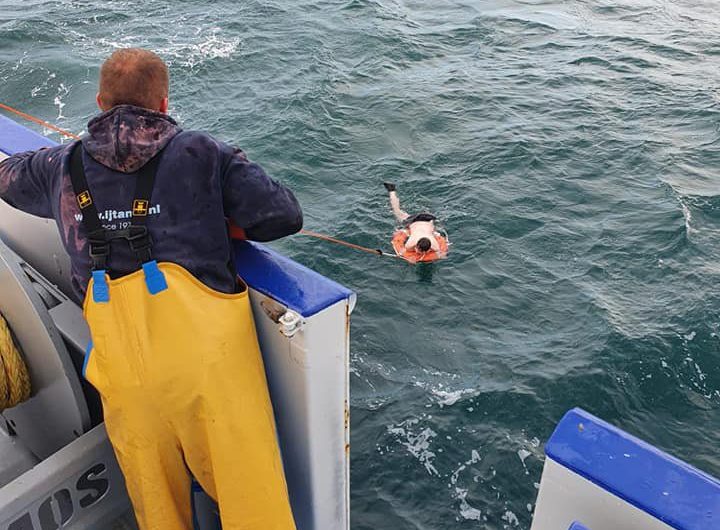 After bringing him safely onboard the boat, the crew noted he was suffering from severe hypothermia and dehydration and did their best to assist in his recovery. The man was also covered in bruises and and his eyes had sunk ‘very deep in his sockets’.

‘It’s a miracle he survived’ the captain said.

‘He looked a bit confused, so we don’t know exactly how long. You can bet that you can’t sleep on such a buoy, especially with the rough weather of the past few days.

The crew wrapped the exhausted man in blankets and supplied him with a Snickers bar and bottles of mineral water, before calling the French Coast Guard for additional assistance, who arrived ‘within ten minutes’.

‘People then think that you should quickly put someone under a warm shower, but that is completely incorrect. You have to warm someone up as naturally as possible,’ he told Nos.

The man’s body temperature was said to be 26°C when he was rescued, which could have been fatally high if he’d been left much longer.

Although the man was too weak to speak properly, he made heart signs with his hands to thank the crew before being airlifted to a hospital in France for treatment.

The man is currently in the intensive care unit of a hospital in Boulogne-sur-Mer, and is able to talk but in ‘bad shape’, according to reports.

The UK Foreign, Commonwealth & Development Office said they have not been asked for consular assistance in this case but were ready to support the British kayaker if requested.

Reflecting on the incident, Captain De Boer, who is still at sea, remarked on what a coincidence it was that the man was found at all.

He said: ‘It was not our plan at all to fish in that region, but we went sailing there after the catch in the morning was a bit disappointing. And then of course, we don’t check every buoy to see if there happens to be a person in need.