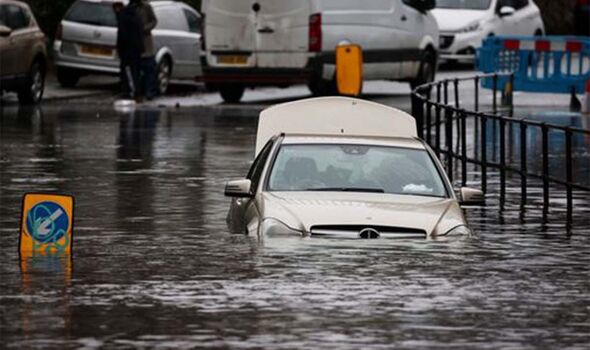 Heavy rain has led to flooding in parts of the UK, with roads closed and drivers trapped due to flood waters.

Reports from Manchester this morning captured the chaos affecting the region, including long queues of traffic on the M56, as well as emergency services wading through the water as cars sat submerged.

According to the Manchester Evening News, there are long delays on the M56 after flooding near the M60 interchange, with flooding also reported on the M60 near junction five and junction 24.

Mort Lane in Tyldesley is also reportedly flooded, while Crossley Road in Levenshulme ‘impassable’. There are also long delays on the M62 with two lanes shut following a crash near Eccles Interchange.

As a result, TfGM issued a warning regarding the travel disruption, explaining that a Met Office yellow weather warning for heavy rain remains in place all day until 8pm.

On Twitter, TfGM said: “Yellow weather warning for heavy rain is in place until 8pm tonight. This will lead to a risk of disruption to the transport network.

Fire crews wade through floodwater on road in Levenshulme

The warning also comes after emergency services were spotted wading through water as vehicles lay submerged.

A video taken on Crossley Road – which is prone to flooding where the run roads under the railway bridge – showed at least two vehicles left submerged underwater in the flood.

Two people are said to have been rescued from their vehicle.

A spokesperson for Greater Manchester Fire and Rescue Service (GMFRS) said: “Just before 10am this morning (Tuesday 10th January), one fire engine from Withington fire station along with the Technical Response Unit from Ashton and the Water Incident Unit from Eccles were called to reports of a person trapped in their vehicles due to flooding on Crossley Road, Heaton Chapel.”

“The crews arrived quickly at scene. Firefighters rescued a man and a women from a vehicle in the flooded water.”

“Firefighters were in attendance for around twenty minutes.”