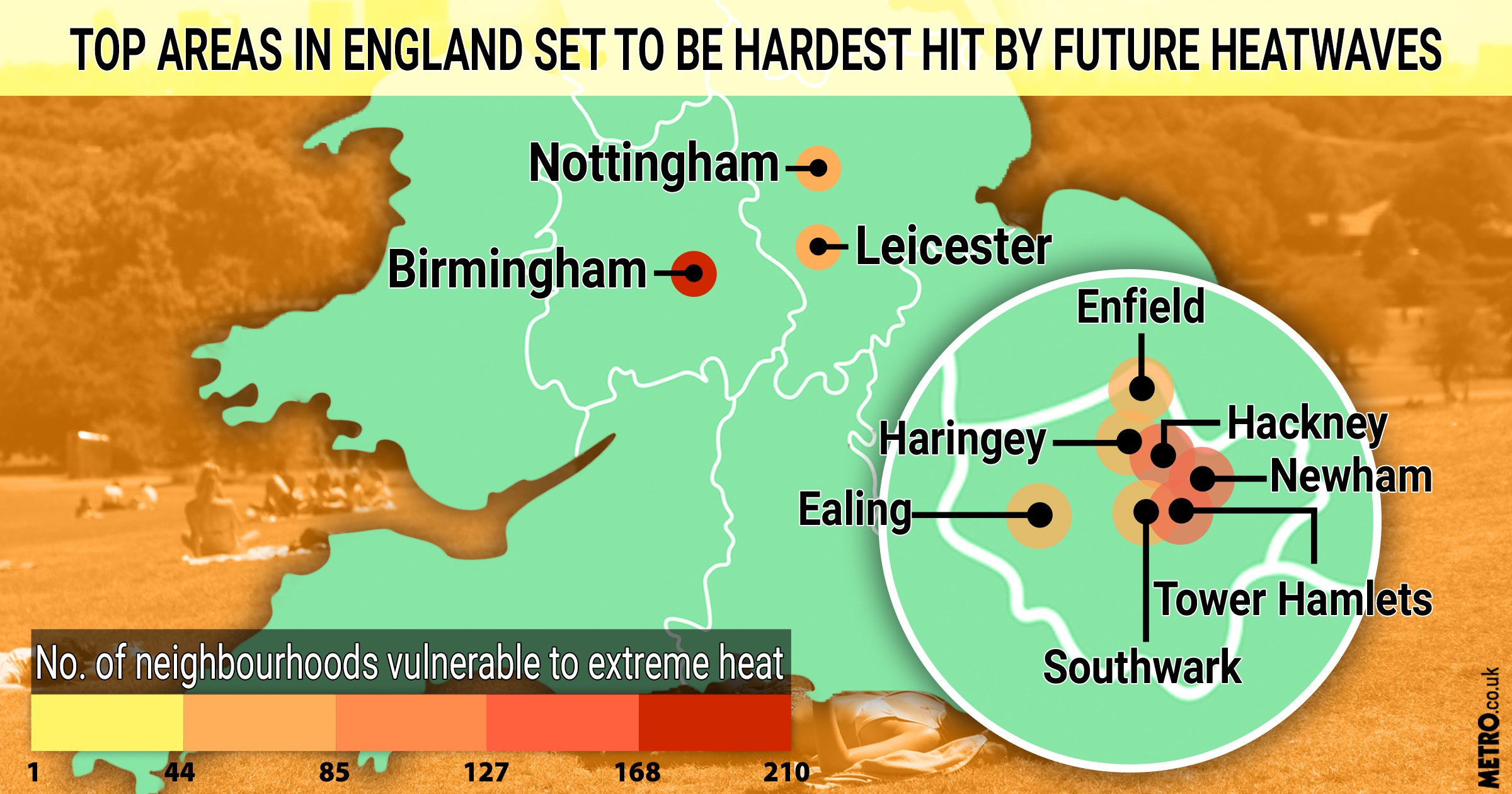 Scientists have revealed which areas in England will struggle the most in extreme heat over the coming years.

Birmingham was far and away the local authority with the most ‘at risk’ neighbourhoods, according to new research from Manchester University and campaigners Friends of the Earth (FoE).

It is followed by the London boroughs of Newham, Tower Hamlets and Hackney, and then Nottingham. Leicester, Coventry, Bristol, Southampton, Peterborough, Reading and Luton also feature in the top 30.

The researchers examined neighbourhoods currently prone to hot weather and then assessed more than 40 factors that would make the communities there vulnerable.

Age was among them, with older people and children especially at risk when temperatures soar, along with the landscape.

Areas crammed with concrete buildings absorb much more heat, with tower blocks especially susceptible to overheating, whereas greener spaces are cooler and provide shelter from the sun.

Crime was one of the unlikelier factors, with researchers pointing out that higher rates may put people off opening the windows.

He suggested planting more trees along the streets and retrofitting homes so they are warmer in winter and cooler in the summer.

The research also suggests that even if global warming is limited to 1.5°C, more than 3,000 of the most vulnerable neighbourhoods – totalling more than six million people – will be exposed to ‘very hot weather’ of 27.5°C for five or more days during the summer months.

If it rises by 3°C, half of neighbourhoods – amounting to more than 30 million people – would be at risk of ‘dangerously hot weather’ above 30°C for five or more days during the summer.

Mr Childs said: ‘Extreme heatwaves and health alerts like we’re seeing this week, will become much more frequent and severe due to climate change.

‘To prevent the most dangerous scenarios becoming a reality, all countries, including the UK, must make greater efforts to prevent runaway climate breakdown.’

He added: ‘Suggestions by some politicians that the UK should dial back on climate goals are short-sighted and reckless.

‘People on the frontlines of the climate crisis in the UK and overseas are already being hit by its impacts, despite being the least responsible.

‘We need governments to double-down on cutting emissions and providing funding for climate adaptation programmes, such as planting street trees.’

A government spokesperson said the UK has already cut emissions faster than any other G7 nation and has made ‘significant’ funding totalling £1.2billion available for councils to take local action.