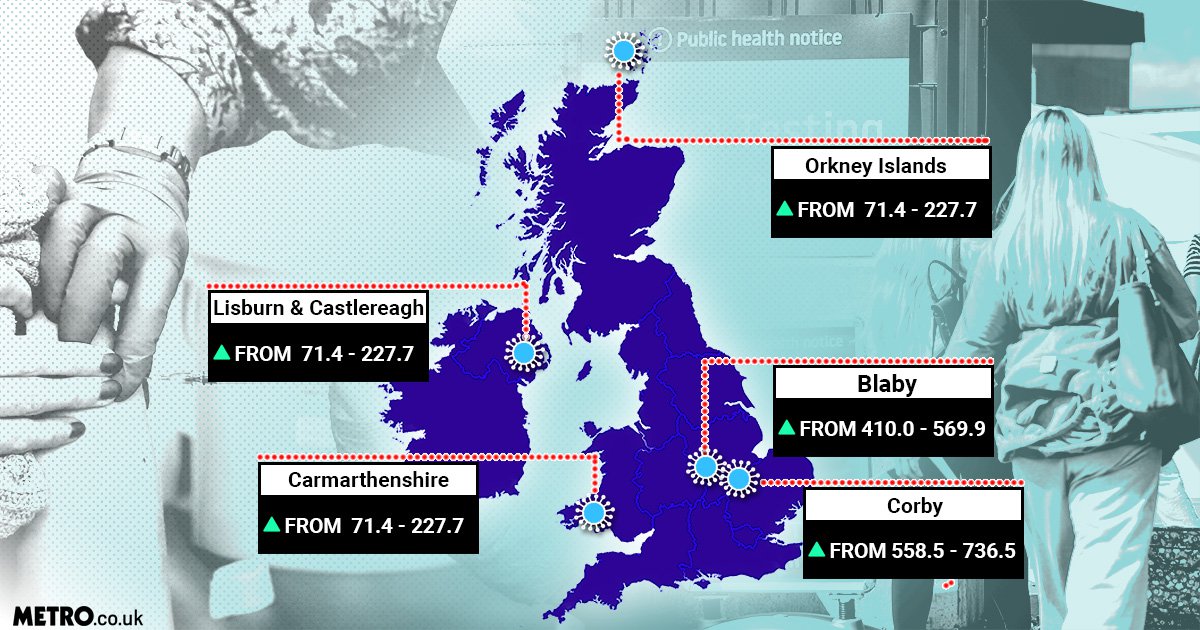 Coronavirus infections have been rising week-on-week in more than half of areas in the UK, according to latest figures.

It comes as the Government reveals plans for all over-50s to be offered a booster vaccine, along with people in care homes and health and social care workers.

Children aged 12 to 15 will also start being invited to get their first jab from next week as Britain braces for the colder months.

Meanwhile 175 (46%) have seen a fall in cases and three remain unchanged.

Scotland is currently suffering the most, with West Dunbartonshire continuing to have the highest overall rate in the UK.

This is up slightly from 1,185.2 in the seven days to September 2, the Mirror reports.

Blaby in the East Midlands had the second largest weekly rise, with the rate increasing from 410.0 to 569.9.

Data for the seven days to September 9 are based on the number of people testing positive in either lab-reported or lateral flow tests.

Figures for the most recent four days have been excluded as they are incomplete and do not reflect the true number of cases.

The Prime Minister is set to reveal his blueprint for avoiding another lockdown in a press conference later today.

This morning the Government announced over-50s will be offered a top-up Pfizer jab at least six months after they received their second dose.

Over-70s are expected to be prioritised, but the Government is reported to be aiming to vaccinate as many over-50s as possible before Christmas.

Experts said the Pfizer/BioNTech vaccine should be used as a booster for more than 30 million people, and that it was safe to be given alongside the usual winter flu jab.

All those who are clinically extremely vulnerable and anyone aged 16 to 65 in an at-risk group group for Covid will also be eligible for a jab.

Yesterday health leaders approved first doses of the Pfizer vaccine for over-12s, with children in England set to get their jabs from next week.

But experts have expressed concerns over the youngest children getting a jab without parental consent.

Professor Anthony Harnden, deputy chairman of the Joint Committee on Vaccination and Immunisation (JCVI), said he would not feel comfortable with a 12-year-old getting a jab if their parent had not agreed.

Vaccines Minister Nadhim Zahawi said children will only be able to have a vaccination against their parents’ wishes following a meeting with a clinician.

It came as a leaflet for youngsters considering vaccination was published on the PHE section of the Government website.

On consent, the document states: ‘You will probably want to share information about the vaccine with your parents and discuss it together.

‘If you are being offered the vaccination at school, you may be given a consent form that your parent/guardian should sign giving permission for you to have the vaccination.

‘The nurse or GP will discuss the Covid-19 vaccine with you at your appointment and will be able to answer any questions you may have.’

Children under the age of 16 are able to get some medical procedures without parental consent if they are deemed competent to make that decision on their own.

Mr Zahawi told Sky News: ‘These are very rare occasions and it is very important to remember that the School Age Immunisation Service is incredibly well equipped to deal with this – clinicians are very well versed in delivering vaccinations to 12 to 15-year-olds in schools.’

The decision to go ahead comes despite the JCVI deciding not to recommend mass vaccination of 12 to 15-year-olds.

The experts had said Covid-19 presents a very low risk for healthy children and that vaccination would only offer a marginal benefit.

But they suggested that wider issues, such as education, should be taken into consideration and examined by chief medical officers of each of the four UK nations.

The Chief Medical Officers urged ministers to press ahead with extending the vaccination programme, arguing that there is ‘extremely powerful’ evidence on the impact of the pandemic on children’s education, as well as the risks to their mental health from missing school.