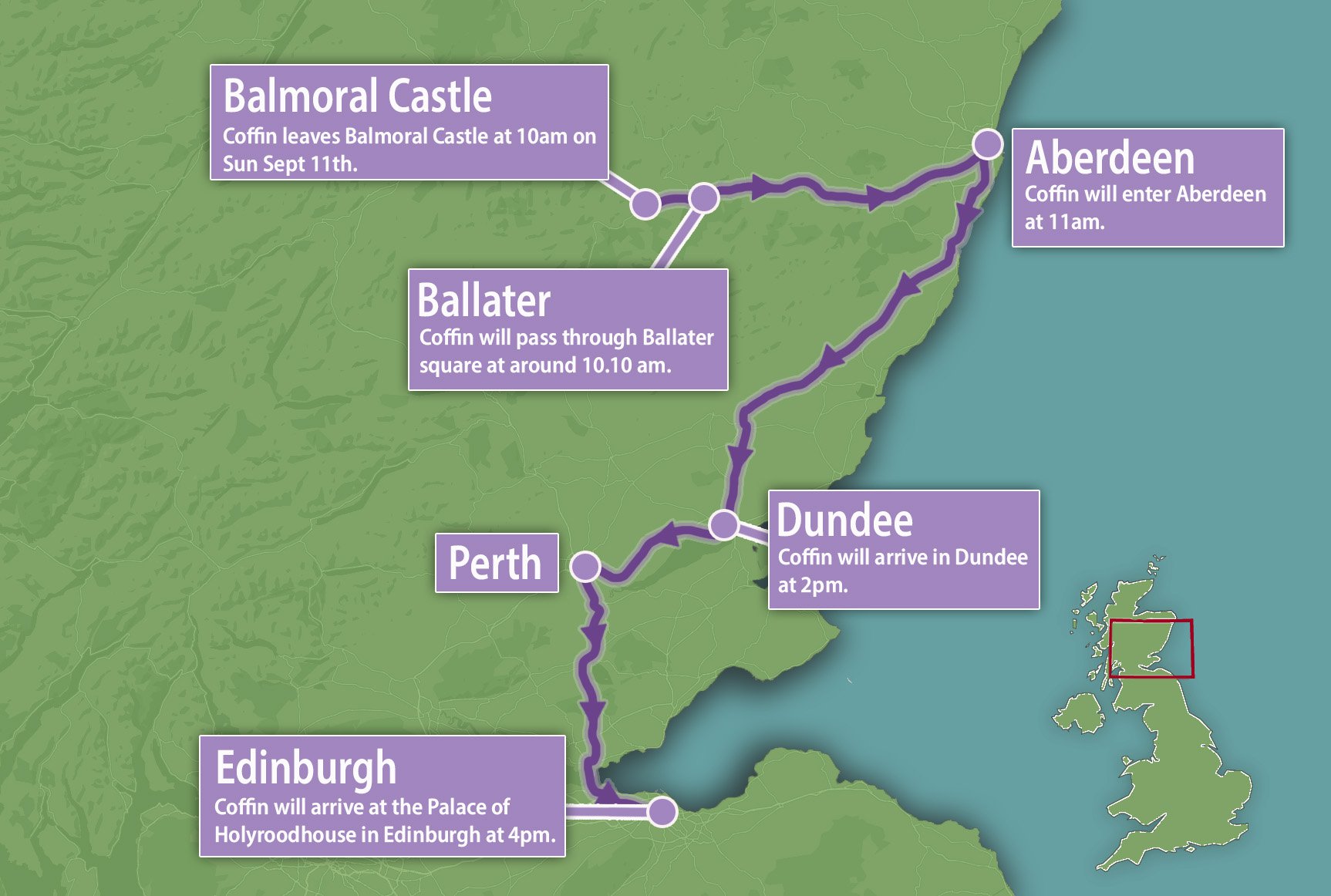 The Queen begins her final journey to her resting place today, travelling from Balmoral to Edinburgh.

The Queen’s cortege will start the journey at 10am by road and make its way through Ballater, Aberdeen, Dundee, and Perth before reaching the Palace of Holyroodhouse in Edinburgh at 4pm.

A service at St Giles Cathedral will take place tomorrow.

Thousands of people will be lining the roads to pay their respects with crowds gathering along the route since early morning.

The hearse will pass along spots fondly remembered by the Queen, including the River Dee and Crathie Kirk.

Ballater is nearest village to Balmoral and has strong connections with the royal family who have visited often.

From there, the coffin will be driven through Aboyne, Kincardine O’Neil, Banchory, Crathes and Peterculter before heading on into Aberdeen at 11.20am, where yellow ‘no waiting’ cones are already being lined up along the streets.

Travelling south of Aberdeen, she will make one final trip over the King George VI bridge, named after her father.

Heading down to Edinburgh, the cortege will then pass through Dundee at 2.15pm and Perth before travelling through Fife and across the Firth of Forth.

When she arrives in Edinburgh at 4pm, the coffin will be taken to the Palace of Holyroodhouse, the official residence of Her Majesty The Queen in Scotland.

On Monday, a procession will march up the Royal Mile to St Giles’ Cathedral, where a vigil of the princes is expected to take place with members of the Royal Family.

She will lie in state for 24 hours before flying by plane to London accompanied by her only daughter Princess Anne on Tuesday.

There will be ‘overwhelming emotion’ when the Queen’s coffin passes through the Aberdeenshire village of Ballater, where many local people knew her, the local minister has said.

Reverend David Barr said locals regarded the Windsors as ‘like neighbours’, particularly as the Queen had been coming to Balmoral Castle since she was a girl.

He said: ‘When she comes up here, and she goes through those gates, I believe the royal part of her stays mostly outside.

‘So, here in the village, we want to give back, (and) by allowing the royal family to come here and go into the shops and have a cup of coffee and not be bothered.

‘That’s what this community has done for 70 years.’

He added: ‘As you stand here today and you watch Her Majesty pass, that will be very tangible and be very real for people, and I think that will bring on an overwhelming amount of emotion.’