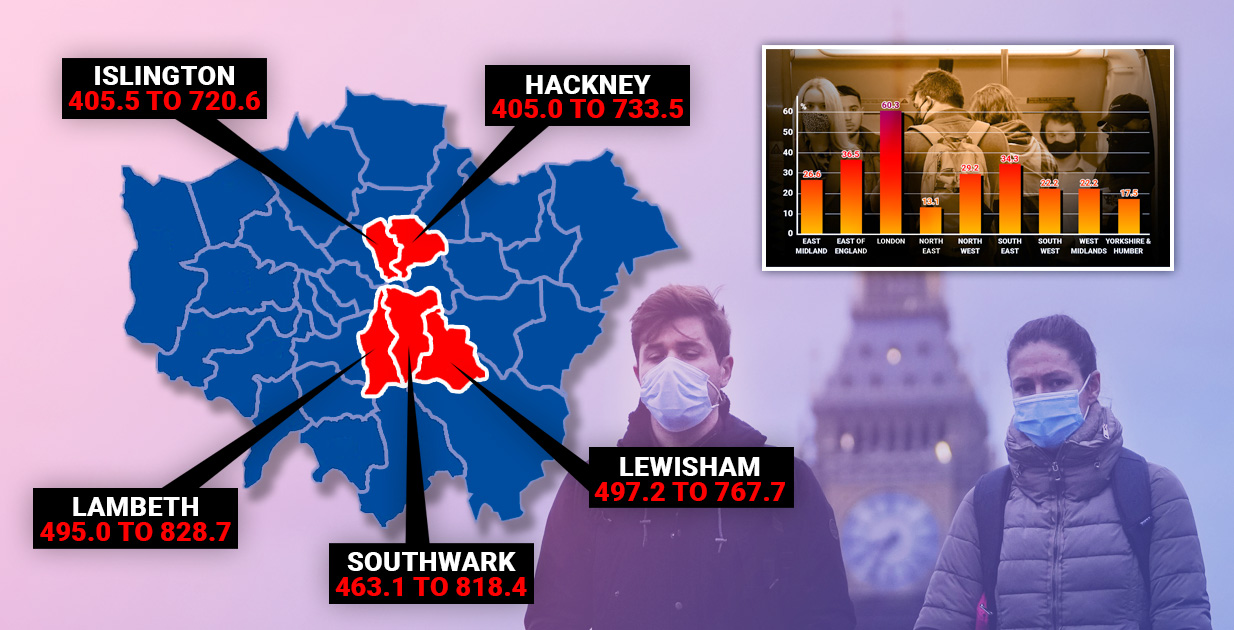 This worrying map shows the five areas where Omicron is rising fastest after it overtook Delta to become London’s most dominant strain.

The capital is once again on course to become the epicentre of the virus, with the variant making up more than 60% of its new cases.

Infections have skyrocketed all over the UK since Omicron was first detected on November 27, with the East of England, the South East and the North West also having high rates.

South Northamptonshire is the current hotspot, followed by Reigate & Banstead in Surrey and then Plymouth, which all have the highest amount of cases per 100,00 people.

But it is London where cases are rising at the fastest speed.

The five UK areas with the biggest week-on-week rises

The five areas with the biggest week-on-week rises are all in the capital.

The figures, from the seven days to December 11, are based on the number of people who have tested positive for Covid-19 by PCRs or lateral flows.

Figures from the UK Health Security Agency show that Omicron now makes up 60.3% of new cases in the capital.

It makes up more than a third of cases in the East of England and the South East, and 29% of new cases in the North West.

However, the highly infectious new strain is soon expected to be dominant across the country.

England’s chief medical officer Professor Chris Whitty has urged people to reduce their social contacts in the run up to Christmas and prioritise ‘the things that really matter to them’.

There are now 15 people in hospital with the new Omicron variant, and cases are doubling every two days.

It is still not clear exactly how sick people will get from Omicron.

Doctors in South Africa have said it is far less severe than the previous strains, but UK medics have been reluctant to endorse that anaylsis due to South Africa’s younger population and high levels of immunity from previous waves.

But he said a peak could still hit ‘very fast’ and that daily hospital admissions could smash the previous record of 4,583 – set in the second wave in January.

He told MPs on the health and social care committee: ‘Even if (Omicron) is milder, because it’s concentrated over a short period of time, you could end up with a higher number than that going into hospital on a single day.

‘That is entirely possible. It may be less than that. But I’m just saying that is certainly possible.’

Prof Whitty also repeated his advice that people should consider limiting socialising in the run up to Christmas, contrary to messaging from government.

At a Downing Street press conference last night, Boris Johnson said he ‘thinks’ his Plan B and the booster roll out will be enough to stop Omicron overwhelming the NHS, and that no more restrictions are currently needed.

But Prof Whitty suggested that people should prioritise their social engagements to reduce the risk of catching and spreading Covid.

Asked to clarify that advice today, Mr Whitty said: ‘It’s a period of the year when lots of people have got things that really matter to them family-wise, also in other bits of their life, and my point was – and I hope I can reiterate this – that people want to protect the time that is most important to them.