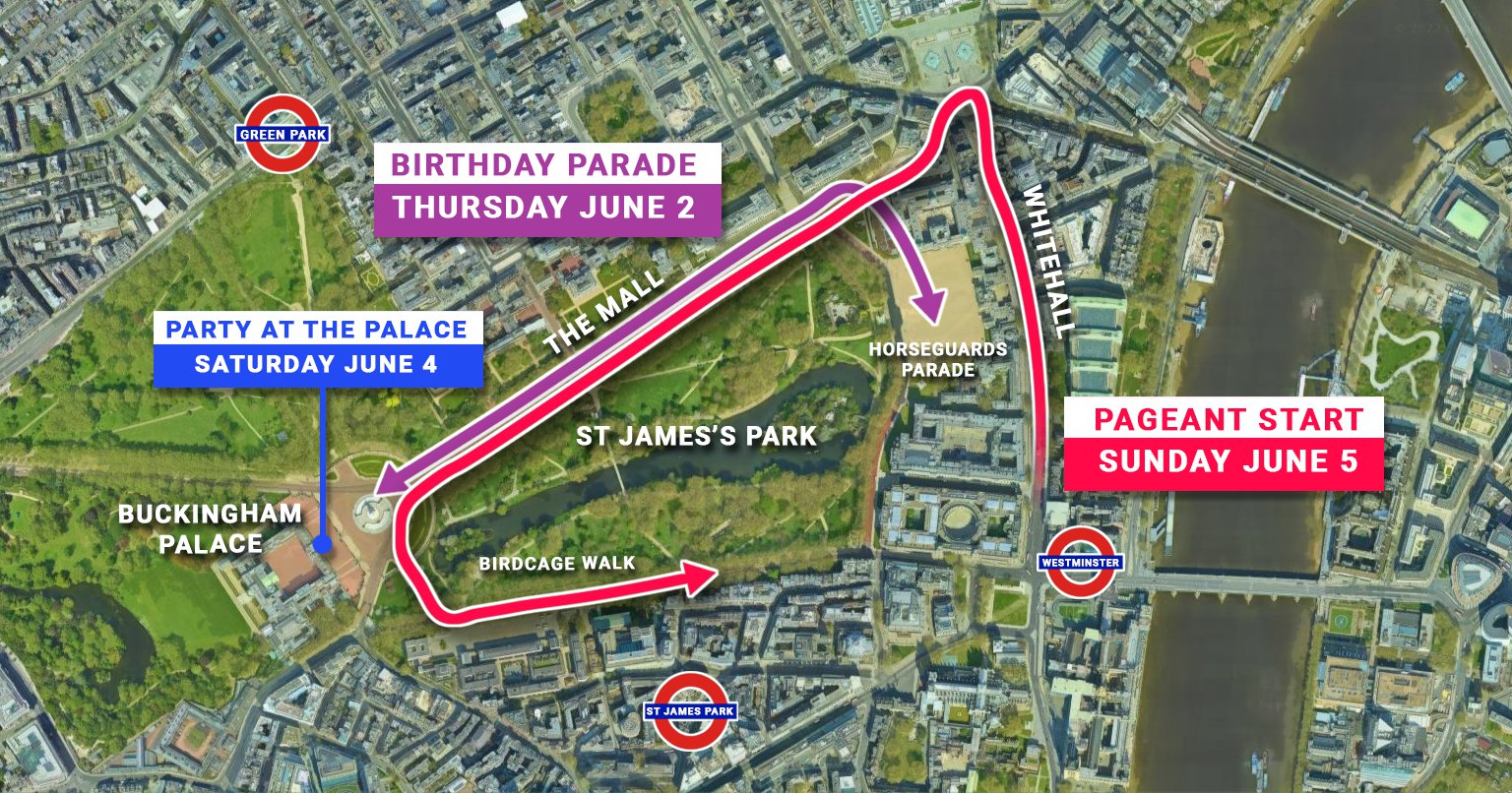 Britain is currently gearing up for one of the biggest national celebrations in its history – the Queen’s Platinum Jubilee.

Her Majesty, the UK’s longest-reigning monarch, is marking 70 years on the throne this Bank Holiday weekend and of course London will be at the centre of all of the action.

So here’s everything you need to know about what is taking place and where over the next few days.

Everything starts on the first Bank Holiday of the week – Thursday, June 2.

The ceremony of Trooping the Colour takes place every year to honour the Queen’s birthday, but this year it will be extra special.

It has marked the official birthday of the British Sovereign for more than 260 years.

The Queen’s birthday parade will see the 1st Battalion, Irish Guards, and more than 1,200 officers and soldiers from the Household Division put on a display of military pageantry on Horse Guards Parade from 11am onwards.

They will perform together with hundreds of Army musicians and around 240 horses, and a royal gun salute will also be fired.

Tickets to see Trooping of the Colour are sold out, but people may be able to view the parade as the troops travel to and from Horse Guards Parade from Buckingham Palace.

People will also be able to watch the event on large screens in St James’s Park, and live on BBC and Sky television.

After the parade, the traditional Royal Family balcony appearance will take place, as it has done in previous years. An impressive flypast will coincide with this.

A service of Thanksgiving for The Queen’s reign will be held at St Paul’s Cathedral on Friday, June 3, the second Bank Holiday of the week.

The largest church bell in the country – Great Paul – will be rung for the service.

Although it was made in 1882, a mechanism inside it broke in the 1970s and it fell silent.

It was restored last year and has been rung on eight occasions since, but this is the first time it will ring for a royal occasion.

Saturday: Party at the Palace

Hope you’re ready to get your dancing shoes on at the weekend, as the party is really coming to Buckingham Palace on Saturday, June 4.

It’s officially called the BBC’s Platinum Party at the Palace concert, and the line-up sounds incredible.

Sadly the ballot tickets have all already been handed out, but you can of course watch it on BBC One or listen to it on BBC Radio 2.

The finale of the weekend will see the Platinum Jubilee Pageant begin at 2.30pm on Sunday, June 5.

According to the official website, the pageant will start on Whitehall, turn under Admiralty Arch and then process up the Mall before finishing outside Buckingham Palace around Queen Victoria Memorial.

There will be viewing areas along the way at Whitehall and along the Mall – no tickets are required, but it of course will be very busy.

Large TV screens will again broadcast the event around the area and in St James’s Park, and it will air on the BBC, ITV and Sky.

The pageant will be split into four acts, each celebrating the Queen’s reign: