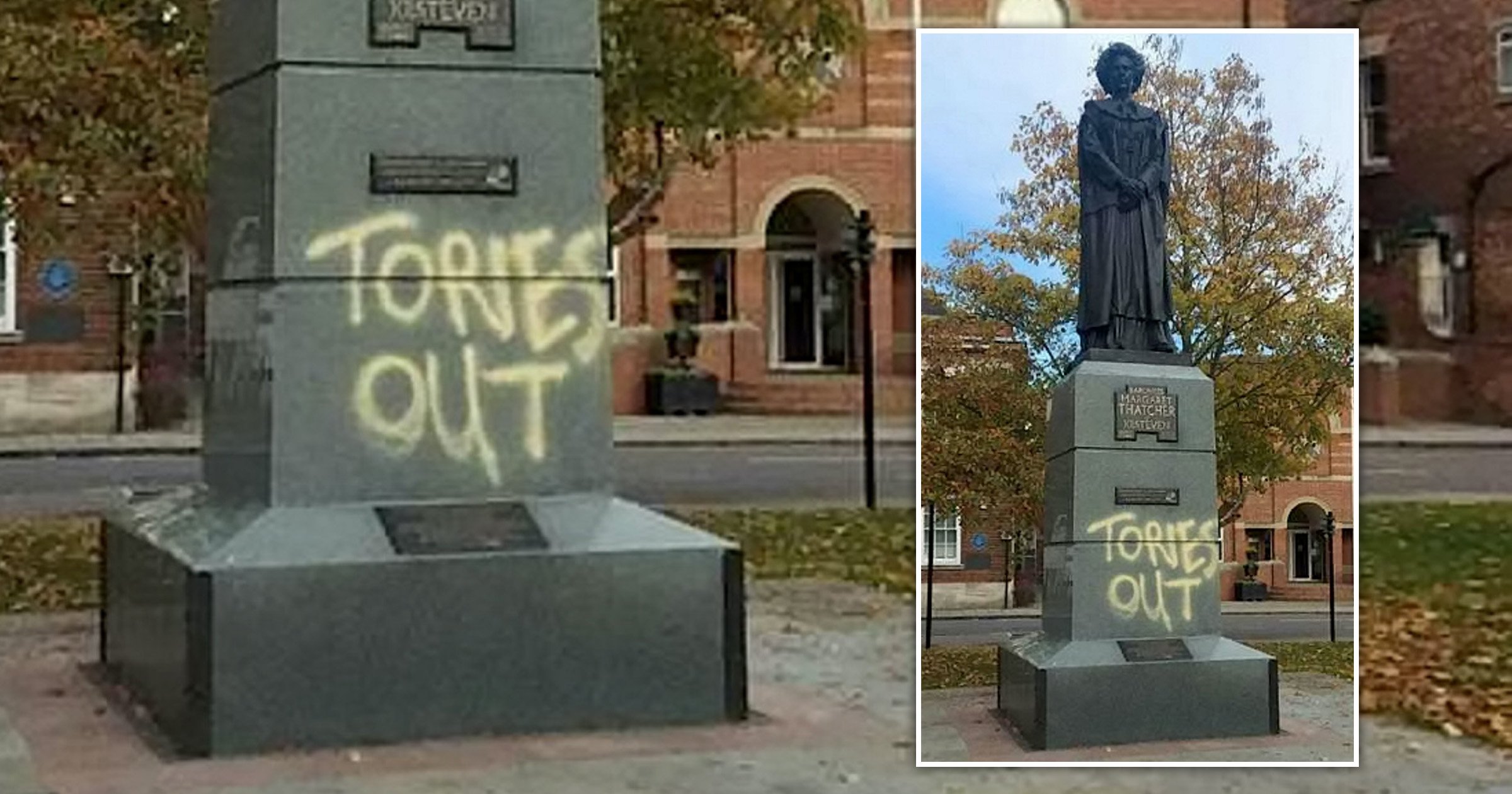 A Margaret Thatcher statue in her hometown has been vandalised for the third time since it was built just a few months ago.

Yobs spray painted the words ‘Tories out’ over the monument in Grantham, Lincolnshire.

It was first unveiled in May on a 10ft high plinth under CCTV surveillance, and has already been vandalised twice before.

Within just two hours of its official opening vandals had thrown eggs at the base of the £300,000 bronze statue, for which a man was later fined £90.

Two weeks later red paint was daubed over it and a red hammer and sickle were painted on nearby fencing.

Now, following Liz Truss’s resignation and a race to find the next PM, the structure has been targeted yet again.

The statue, which sits on St Peter’s Hill, has been spray painted with the words ‘Tories out’ in big yellow capital letters Lincolnshire Police confirmed it was being treated as criminal damage.

A police spokesperson said: ‘Incident 117 of 22 October is a report of criminal damage to the Margaret Thatcher statue on St Peter’s Hill, Grantham.

‘This was reported just after 8am.’

Grantham residents reacted to the latest vandalism to the statue on social media after images were posted on Facebook.

One wrote ‘And this achieves what exactly? Done by a brain dead yob no doubt’ while another said: ‘How old are these people, 12?’

One person put: ‘Just shows how people feel towards the Tories in this town and the mess this country is in.’

Another added: ‘We never wanted this statue in the first place. When will the council tear it down???’

A fifth web user commented ‘No matter what your politics no excuse for vandalism!!’

Another said: ‘On top of the ridiculous cost in the first place this must be costing the taxpayer a lot of money to clean up every time. What a waste of cash.’

The only previous memorial to her in the town was a plaque on the corner of North Parade and Broad Street to mark where she was born.

A South Kesteven District Council spokesperson said previously: ‘While SKDC understands the strength of feeling surrounding the memorial, it condemns the actions of those who seek to damage any public property, or otherwise break the law.’