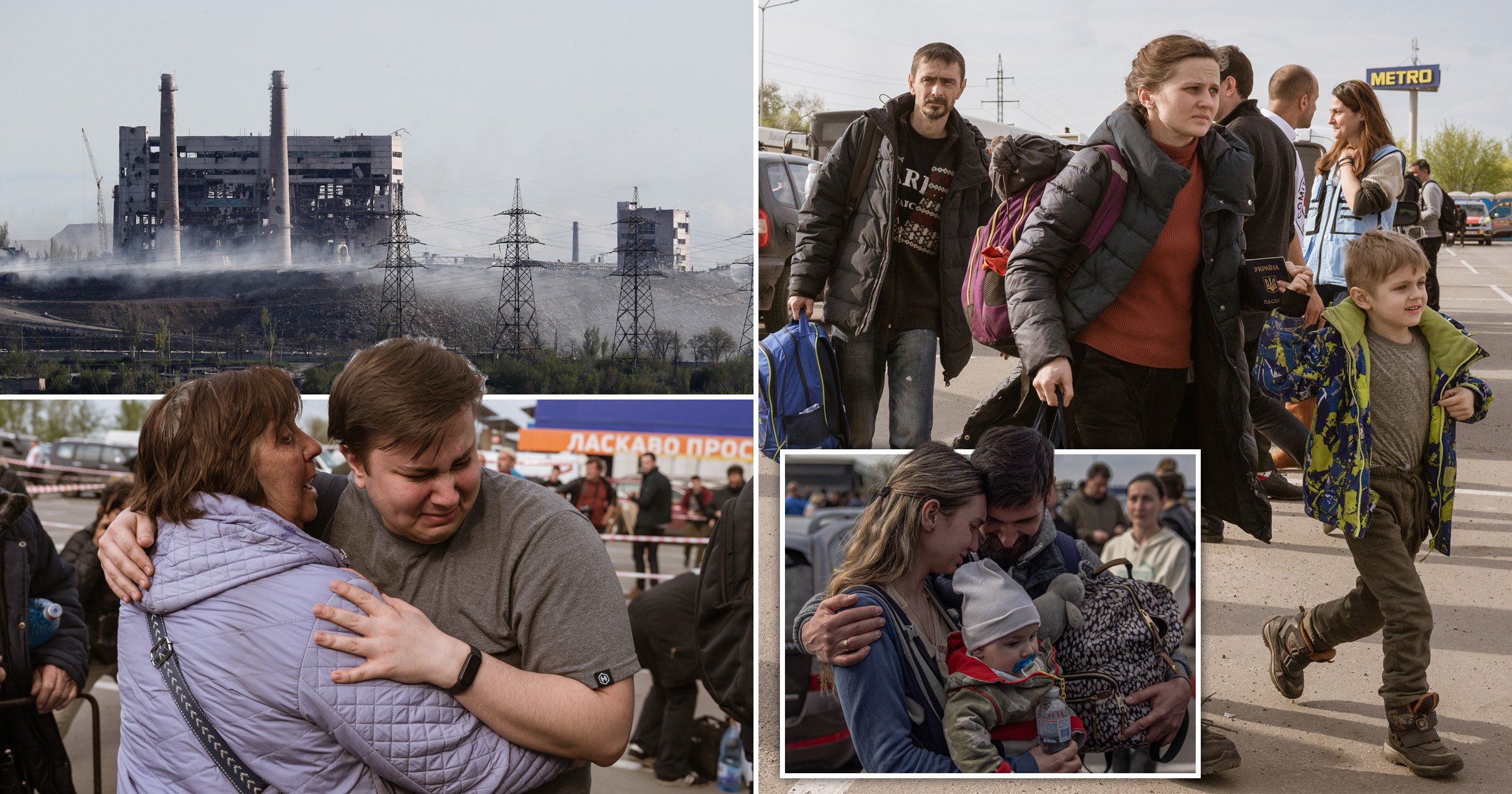 Civilians rescued from Mariupol after eight weeks of ‘hell’ claim Russian soldiers checked their underwear and called them ‘Ukrainian scum’ before letting them escape in a convoy of buses and ambulances.

Exhausted survivors have shared chilling accounts of the interrogations they allegedly faced after emerging from the bunkers under the Azovstal steelworks to ‘see the daylight after two months’.

It comes as Kremlin forces storm the bombed-out steel mill containing the final pocket of resistance in the war-torn city that is a crucial spot for both sides.

Around 156 people were rescued over the weekend after the Red Cross secured a cease fire, but it is believed that 200 are still inside and 100,000 in the city overall.

Part of the deal was reportedly that those being saved had to face ‘screenings’ by Russian troops at the occupied town of Bezimenn.

Speaking to the Daily Mail, survivor Elina Vasylivna said: ‘They took our fingerprints, took pictures. My head was spinning.

‘The militia did a questionnaire and asked us how we feel about the war, about our government. They called us “Ukrainian scum”.’

The 54-year-old went on to compare the situation to ‘a totalitarian state’ as she claimed her group’s phones were taken and ‘a personal examination’ of their underwear and belongings performed.

Hiding in the plant with her elderly mother, 82, and no water or electricity was ‘a nightmare’ and something she ‘wouldn’t wish on her worst enemy’, she said.

They both starved and were forced to brush cement and glass off biscuits to eat them ‘because we hadn’t seen bread for six weeks’.

Another evacuee said she went to sleep at the plant every night afraid she would not wake up.

‘You can’t imagine how scary it is when you sit in the bomb shelter, in a damp and wet basement, and it is bouncing and shaking’, Elina Tsybulchenko, 54, said.

She added that if their shelter was hit by a bomb like the ones that left the huge craters she saw on the two occasions she ventured outside, ‘all of us would be done’.

Some people were in tears as they made their way to a tent offering food, diapers and connections to the outside world.

But many have been left behind at the steelworks, with no further evacuations guaranteed at the moment.

Overnight, the area was hit with naval artillery fire and airstrikes, with two civilian women killed and 10 civilians wounded.

Sviatoslav Palamar, deputy commander of Ukraine’s Azov Regiment, said on the messaging app Telegram: said: ‘We’ll do everything that’s possible to repel the assault, but we’re calling for urgent measures to evacuate the civilians that remain inside the plant and to bring them out safely.’

He said the prior evacuations are ‘not a victory yet, but it’s already a result’, adding: ‘I believe there’s still a chance to save other people.’

The Kremlin has not commented on the latest allegations, but has continually denied responsibility for alleged war crimes including mass civilian killings and bombing hospitals.

In other battlefield developments, 10 people have died in the shelling of a chemical plant in Avdiivka.

Meanwhile, strikes have knocked out electricity in parts of Lviv and at least a half-dozen railroad stations have been attacked around Ukraine.